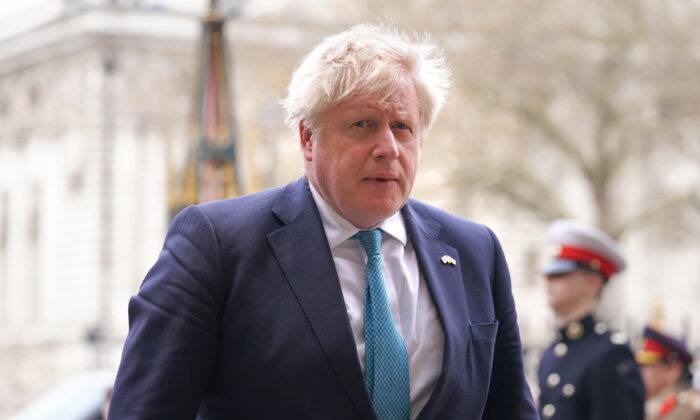 Prime Minister Boris Johnson arriving for a Service of Thanksgiving for the life of the Duke of Edinburgh, at Westminster Abbey in London on March 29, 2022. (Kirsty O’Connor/PA)
UK

Partygate: Boris Johnson to Be Investigated Over Alleged Contempt of Parliament

A third investigation will be launched in relation to lockdown-breaching gatherings in the center of the UK government as MPs voted to refer Prime Minister Boris Johnson to a parliamentary committee on Thursday.

The motion, proposed by Labour leader Sir Keir Starmer and six other opposition parliamentary party leaders, asked the House of Common to note that some of Johnson’s assertions in the House on the party allegations “appear to amount to misleading the House,” and to refer the matter to the Committee of Privileges so it can consider whether Johnson’s conduct amounted to a contempt of the House.

The privileges committee is also asked not to “begin substantive consideration of the matter” until an ongoing police investigation into 12 of the gatherings is concluded.

The motion was passed without opposition after the government withdrew its own motion proposing a delay to the referral until after the police investigation and a Cabinet Office internal investigation into the matter.

Johnson has been mired in the so-called Partygate crisis since Dec. 1, 2021, after it was reported rule-breaking parties had taken place in Downing Street in 2020 during CCP (Chinese Communist Party) virus lockdowns.

Johnson assured Parliament that no CCP virus rules were broken before more partying allegations dripped through media headlines and led to two investigations into gatherings in Downing Street and the Cabinet Office, angering the public, many of whom couldn’t visit their family members in hospitals or nursing homes or attend funerals of family or friends due to the lockdown rules.

Johnson was allegedly present at six gatherings and has so far been fined once by the police over a birthday get-together for him, along with his wife Carrie Johnson and Chancellor of the Exchequer Rishi Sunak.

Starmer’s motion cited several examples of Johnson’s assertions in Parliament, including one made on Dec. 1, 2021, when the prime minister said “all guidance was followed in No. 10,” and assertions he made a week later saying he had been “repeatedly assured since these allegations emerged that there was no party and that no COVID rules were broken,” and that “the guidance was followed and the rules were followed at all times.”

Chris Bryant, the Labour chair of the privileges committee, said he will recuse himself from the inquiry because he had previously commented on the matter.

Bryant said he would have refrained from making comments but he didn’t expect the matter would be referred to either of the two watchdog committees he chairs.

Bryant said that he believes Parliament had been misled by Johnson as it “got a false impression” from his assertions, but “the question is whether that was intentional.”

He later told MPs that it’s important non of the other six committee members are pressured by their colleagues in Parliament.

Since he received a fine on April 12, Johnson has repeatedly apologised to Parliament and the public, saying it didn’t occur to him that a gathering in the Cabinet Room just before a vital meeting on COVID strategy could amount to a breach of the rules. But MPs from opposition parties and one MP from the Conservative Party insisted on Tuesday that he should resign.

The Metropolitan Police on Thursday said it will not provide updates on any further Partygate fines until after the local elections, which are set to be held on May 5, but Downing Street has indicated that it will still say whether Johnson or the Cabinet secretary are fined before the local elections.

A Number 10 spokesman said: “We’ve committed before to being transparent and to letting people know if that were the case. That hasn’t changed. But specifically, the announcement made today—it’s clearly a matter for the Met Police, it’s their investigation and it’s an independent matter for them.”

He said that he was not aware of any conversations between Downing Street and Scotland Yard preceding the Met’s announcement.