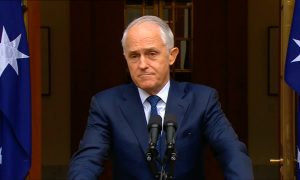 Party Votes in Scott Morrison as Australia’s Next Prime Minister

Scott Morrison has succeeded in his bid to become Australia’s 30th prime minister and leader of the Liberal Party, ending the nation’s leadership uncertainty after a tumultuous week of intense debate and lack of confidence in outgoing prime minister Malcolm Turnbull’s leadership.

After what has been the second leadership challenge this week, Morrison came out victorious after defeating Foreign Minister Julie Bishop and former Home Affairs Minister Peter Dutton to become prime minister—the sixth leader Australia has had in the last decade.

Turnbull, who called the leadership meeting after losing the majority support of the party, opted not to contest the vote.

The Liberal party is the senior partner in the ruling centre-right Liberal-National Coalition. The Coalition government has consistently trailed opposition Labor in opinion polls in recent months.

Morrison, who was previously the treasurer, won the leadership ballot against Dutton by a vote of 45 to 40. Bishop was eliminated during the first round of the contest, having only secured 11 votes. Peter Dutton polled 38 votes and Scott Morrison 36. Energy and Environment Minister Josh Frydenberg has been elected as deputy leader of the party by a majority of votes. Earlier in the meeting, party members also voted 45 to 40 for a spill of the leadership.

Morrison will be sworn in as prime minister by the governor general.

Following the meeting, Dutton congratulated the other contenders to the leadership and pledged his loyalty to Morrison.

“The course from here is to provide absolute loyalty to Scott Morrison to make sure we win the election and we defeat Bill Shorten,” Dutton said.

The nation’s leadership crisis was sparked when Turnbull called a snap leadership on Aug. 21, challenging opponents to contest him for the top job. Former Home Affairs Minister Peter Dutton took up the offer but was defeated by a vote of 48 to 35.

Dutton subsequently resigned from his position and spent time throughout the week garnering support from fellow party lawmakers in order to request a second challenge on Turnbull’s leadership.

Former International Development Minister Concetta Fierravanti-Wells, who quit on Aug. 21, said she resigned because she believes the prime minister had eroded the voice of the Liberal party’s conservative base.

Amid the political confusion, Turnbull declared at a press conference on Aug. 23 that he would call for a party room meeting if he received a petition with 43 signatures from lawmakers—which is a majority of the party room. Shortly after noon on Aug. 24, the petition with the required signatures was submitted and the meeting was subsequently called.

Questions about Dutton’s eligibility to remain in Parliament came to the forefront during the week. Reports that he financially benefited from government funding from two Brisbane childcare centers owned through his family trust—not allowed under the constitution—triggered uncertainty as to whether Dutton could continue to run for the leadership position.

Attorney-General Christian Porter sought advice regarding the issue from Australia’s Solicitor-General Stephen Donaghue, which was released on Aug. 24. It stated Dutton was “not incapable of sitting as a member of the House of Representatives by way of section 44 (v) of the constitution” and that there was no agreement between Dutton’s trust and the government, reported the ABC.

However, Donaghue’s advice also suggested that the circumstances relating to Dutton’s eligibility have not been tested in the nation’s high court. He said the High Court could possibly make a ruling contrary to the advice, rendering Dutton ineligible to sit.

“I consider there to be some risk … that the High Court might conclude that there is a conflict between Mr. Dutton’s duty as a parliamentarian and his personal interests,” the advice states.

“While I consider the position summarised above to represent the better view, it is impossible to state the position with certainty.”

Following the second leadership spill on Aug. 24, Turnbull has not officially announced whether he will resign from parliament. If he resigns, it could mean that the government would lose its majority pending a by-election.