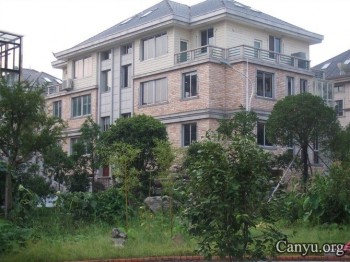 Corrupt official Wang Rongfei now lives in a mansion while the farmers he ripped off dare not speak up. (Photography by Canyu.org)
China

Party Secretary Pockets Big Bucks While Farmers Given Nothing

After fabricating a land use document, the Communist Party Secretary in Yiwu City in Zhejiang Province, has expropriated farmland and auctioned it off for his own benefit.

The secretary, Wang Rongfei, six years ago submitted to the Yiwu City Land Resources Bureau a document that supposedly stated that local residents had agreed to stop farming 292 acres. But only a small number had in fact signed and Wang duped the Bureau into believing that all those involved had agreed.

The land, situated in an extremely desirable location, was subsequently sold for over US$1 billion, and though the farmers are entitled to compensation for the land, none has yet received a cent.

The residents, from Xiawang Village in Yiwu City, have made many trips to petition the authorities of Zhejiang Province and Beijing to appeal their case, but to no avail. Some village representatives have even been intimidated by local authorities

Residents say that a villager named Wang Liqing, who often helps and accompanies fellow villagers to petition, was arrested by the police at midnight on May 15, 2009, and charged with extorting about US$1,200. Wang was sentenced to 18 months of imprisonment.

Later, the "extortion victim" showed up at the police station and said that the transaction was only a routine rental payment. Even though his testimony showed that Wang Liqing had simply collected the payment from the farmers and paid it to a landlord regularly and had done nothing wrong, Wang Liqing was still required to serve the sentence.

Without compensation for their land, the villagers are in dire economic straits. Meanwhile, according to Wang Liqing, Party Secretary Wang Rongfei lives in a very opulent villa, drives a Lexus imported from Japan, and leads an extravagant lifestyle.

The representatives of Xiawang Village recently contacted the United Nations, hoping to raise, at a session of the Human Rights Council on Sept. 20, the issue of how corruption in China is depriving farmers of their land and thus impoverishing them.