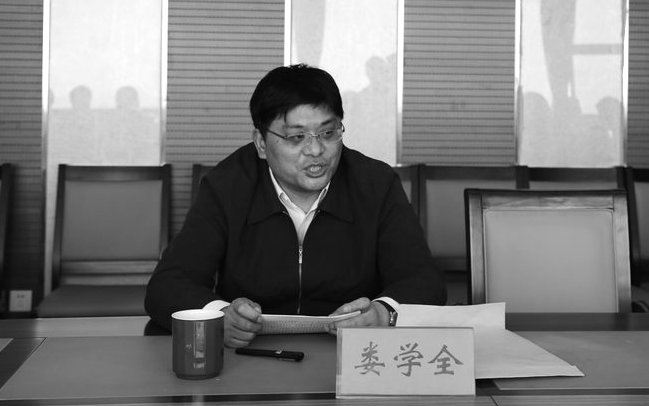 Lou Xuequan, 50, former Party Secretary of Liuhe District in Nanjing City, hanged himself at his home on Sept. 18, 2014, three months after being dismissed for taking bribes. (Screenshot/zx.njlh.gov.cn)
China

Party Secretary Hangs Himself After Being Sacked

The Communist Party secretary in a district in the capital city of eastern Jiangsu Province was found hanging by his neck in the family home on Sept. 18, three months after he was sacked for taking bribes, misusing money meant for research expenses, and enjoying sumptuous banquets paid for by businessmen who sought his favor.

The 50-year-old Lou Xuequan, former Secretary of Liuhe District in Nanjing, was discovered by his wife at around 5 a.m. He was rushed to hospital but was dead by the time he got there, according to state news reports, and later confirmed by the city’s public security bureau.

He is the latest official to kill himself in the ferocious campaign of anti-corruption and political purges being conducted by Party leader Xi Jinping and his appointed deputy Wang Qishan.

Lou was removed on June 18 after the Central Commission for Discipline Inspection, the Party’s anti-corruption taskforce, found that he had accepted bribes and improperly used public funds.

After losing his post, Lou several times attempted to seek help and guidance from higher-level officials, but they assiduously avoided him, an insider told China Business News.

Lou was in charge of Nanjing’s house demolition and construction projects for many years. Such projects are loathed by Chinese citizens because they can involve the expropriation of land and demolition of residential housing, with improper or sometimes no compensation, as the land is flipped to real estate developers for a quick profit for local governments.

Jiangsu Province is one of the stomping grounds of Jiang Zemin, a previous leader of the Chinese Communist Party, but his presence there has not prevented the anti-corruption purge moving ahead at full steam. Official reports say that 15 departmental heads in Jiangsu were sacked during the first half of the year, and that Party secretaries of three districts in Nanjing have been sacked for corruption. Former mayor of Nanjing, Ji Jianye, who shared close ties with Jiang Zemin, was investigated last October, the beginning of the punishing series of takedowns in Jiangsu.

Cadre suicides have been noted in the Chinese press with regularity this year. By the beginning of August, at least 31 officials had killed themselves since January, according to Chinese press reports. Authorities often say that “depression” is the main cause.

Chinese Internet users sometimes lament the deaths—if only because information died with the officials. “If he didn’t die, it may have been possible to catch some bigger tigers,” wrote an anonymous Internet user from Guangdong Province, the term “tiger” being a euphemism for a high-level official. “But once he dies, the case ends there. He was probably forced to commit suicide.”