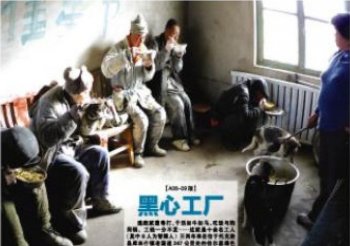 Sophia Fang
View profile
Follow
biggersmaller
Print
Local Communist Party officials in Sichuan Province are behind an institution that kidnaps mentally handicapped and homeless people and forces them into slave labor, according to an investigative journalist from Hong Kong.

The inmates were hired out as laborers as far away as Xinjiang Province. To turn them into “good workers” they were beaten and shocked with electric batons and kept in subhuman living conditions, reports say.

Parts of the story were first told by Xinjiang Metropolis News on Dec. 13. The report said that the Jiaersi Chemical Plant in Toksun County, Xinjiang Province, had been using over 10 mentally disabled people from the “Self-Sufficient Group for the Disabled” (Self-Sufficient Group) in Qu County, Sichuan Province as workers. They were subjected to year-round heavy labor but were never paid. Their living conditions were worse than that of pigs and dogs, and anyone who tried to escape would be severely beaten, the report said. Following an official investigation, the man responsible for the Self-Sufficient Group, 46-year-old Zeng Lingquan, was taken into custody on Dec. 13, the report said.

The report was picked up by other Chinese media and has attracted much public attention inside China. Over the following week, several media reported additional information and often shocking details.

Yunnan Info Daily, said in a report on Dec. 21 that newcomers to the Self-Sufficient Group were greeted with severe beatings until they were completely subdued, then they were trained to perform labor. It said Zeng liked to use electric wires to spank the bare buttocks’ of the hapless laborers. If this was not enough, he would use an electric baton, “which makes the mentally ill workers very obedient.”

An investigative report by Yuan Ling, a Phoenix Weekly reporter, published on Dec. 19 via his blog as well as by Radio France Internationale (RFI), revealed a contract to obtain workers by the Xinjiang Jiaersi Chemical Plant from the Self-Sufficient Group. Jiaersi was only to provide food to the workers; their wages were to be paid to Zeng.

In addition, Yuan reported on what appears to be an organized slave trade ring involving two different institutions for the homeless and mentally handicapped in Qu County, one of them backed by local government.

Yuan said that there is a government-backed slave camp in Qu County bearing the official name “Qu County Rescue and Support Center, Taipingzhai Station” (Taipingzhai Rescue Center). The Center is run by a Mr. Yang Junyi.

Yuan said the Taipingzhai Rescue Center exchanged slaves with Zeng’s Self-Sufficient Group under some sort of contract. The slaves were sent to work as far as Xinjiang Province and as close as local brick factories, construction sites, and farm fields in Qu County, with the income going to the Taipingzhai Rescue Center. This was documented in his Sina blog post of Dec. 19 .

However, 20-odd days later it reopened with a new name: “Qu County Rescue and Support Center, Taipingzhai Station,” which is a branch of a government-run, county-level rescue center. Its stated purpose is to provide temporary shelter and support to beggars, homeless, and the mentally handicapped—yet it is a place where people have been subjected to hard forced labor under the threat of dogs, batons and ropes, Yuan said.

Liu Dingming, the director of the Qu County Rescue and Support Center, told Yuan that 2005 and 2006 was the peak of slavery at the Taipingzhai Station. Almost 70 slaves were working for the Center on a daily basis during that time.

Liu also said that he only went to inspect the Taipingzhai branch once or twice a year.

The Taipingzhai Rescue Center made huge profits from workers’ labor. For example, a construction business would be charged 30 to 50 yuan per day per worker, and the money all went to the staff of the Rescue and Support Center instead of to the workers, Yuan said in the blog post.

They once had a contract with a brick factory in a nearby village and sent a dozen mentally handicapped workers there for two years, making vast profits, Liu said.

The slave workers at the Taipingzhai Rescue Center did not have names, just numbers or nick names. They lived in a damp basement where they slept on a cement floor lightly cushioned with straw. Meals generally consisted of sweet potato porridge with a little rice; meat was only served a few times a year. Being always hungry, they would sometimes steal tofu and raw meat when they were working in the village.

The Taipingzhai Rescue Center is surrounded by steep cliffs on three sides, making it impossible to escape. But there were always some who tried—and failed. Many were beaten. Some were left out in the cold, others starved to death; some jumped off the cliff while others fell sick and died, among them young children.

Villagers told Yuan what they witnessed after one slave attempted to escape. The man was hung up and severely beaten, then thrown off the cliff. When a farmer made a report to the police, staff from the Center hastily recovered the body and buried it.

One villager said in the summer the homeless and mentally handicapped are made to work from morning till 10 at night. During the heat of the day, they still have to work without even a straw hat. He said some villagers reported these things to county and city officials, but no one was able to bring a case against Yang.

On Dec. 21 the Qu County government announced that Yang has been detained for a criminal investigation and Liu was suspended from his job, the Oriental Morning Post reported on Dec. 22.

According to a Southern Weekly report on Dec. 24 the Taipingzhai Station transferred all slave workers to nursing homes in neighboring counties and townships after the story was exposed in the media.

Villagers, and a Taipingzhai Station guard named Bai Longquan, confirmed that some slave workers were regular people who had simply been kidnapped. One physically disabled man told Southern Weekly that one day, while walking down a road, a van suddenly stopped next to him and he was grabbed and forced in: That’s how he became a slave at the Taipingzhai Rescue Center.

The revelations shocked the Chinese public, who are generally blocked from hearing stories of lurid inmate abuse by authorities, be it in the mental health, prison, or forced labor through “reeducation” systems.

One blogger said the darkest corner in China has been exposed by the Phoenix Weekly reporter, and it made him cry.

Another blogger named Han Jianping said that slavery should be treated and punished as a crime against humanity in China’s legal code.

China has 12 million mentally disabled people, according to a June 10 report by Legal Daily.

On Oct. 21 The Epoch Times reported on the findings of a report by two Chinese public welfare organizations, Mental Illness and Social Watch, and Equity and Justice Initiative. The report analyzed China's mental health care system, saying that it is hugely flawed. Many genuine mental patients are not able to receive treatment due to financial difficulties. At the same time many mentally healthy people are forced into psychiatric hospitals through political campaigns, such as Falun Gong practitioners, or by people who have conflicting interests with them.

The report also says that according to statistics published by China’s Center for Disease Control and Prevention in early 2009, there were more than 100 million people with one or another form of mental illness. Research conducted by the World Health Organization (WHO) shows mental illness accounts for 20 percent of all illnesses in China, more than twice the world average.