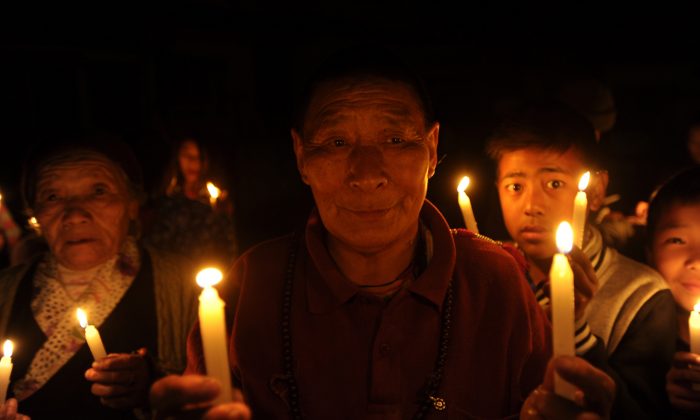 Tibetans-in-exile take part in a candlelight vigil in Kathmandu, India, on Feb. 13, 2013. A Chinese official has told a German news magazine that he will publish a book about the Party's policies in Tibet. (Prakash Mathema/AFP/Getty Images)
China

A member of the Chinese Communist Party, originally from Tibet, has written a book about what he calls the oppressive policies carried out by the Chinese regime in his homeland. He intends to stay anonymous for as long as possible, since he could become a target if his identity was known.

The existence of the book manuscript was first reported by Der Spiegel, a German news magazine, who met the author secretly in China.

Over 60 years ago, Chinese military forces invaded Tibet and have since then ruled the country as part of the People’s Republic of China.

Initially, some Tibetans were hopeful for positive change when Chinese forces invaded, but communist officials suppressed Tibetan tradition and religion. The CCP, for example, made women to wear Han Chinese-style trousers, and made them cut off their braids.

One million nomadic herders have been forced to abandon their native grazing land due to PRC resettlement policies.

In the book, the Tibetan official writes “everything was and still is far worse than people in the West suspect.” He adds that: “There is substantial surveillance and limited freedom.”

Uprisings have been quickly suppressed by Chinese military forces. In 1956, when monks killed a corporal in the People’s Liberation Army, a cavalry regiment responded by attacking about 200 innocent Tibetan women and children in the town of Qiuji Nawa in Gansu Province.

“The way the members of the Armed Police behave is anything but humane. They kill people as cold-bloodedly as poisonous snakes. They indiscriminately beat local residents, loot their property and kill them if they defend themselves,” the Communist Party insider writes in his manuscript, according to Der Spiegel.

Tibetans have since turned to radical ways of protest, including self-immolation. Since March 2011, over 100 Tibetans have set themselves on fire as a public display of desperation. Authorities have made strenuous efforts to prevent information about these cases from reaching other countries.

In March of 2008, thousands of Tibetans revolted as Beijing was preparing for the Summer Olympics and intended to showcase its economic prosperity and ethnic harmony. The revolt drew negative international attention, and the police and military arrested about 6,000 people in response.

Chinese authorities have come to the conclusion that the only way to subdue the Tibetans is to increase investment and enact harsher punishments. Monks are required to distance themselves from the Dalai Lama, and some lamas have been imprisoned or sent to labor camps.