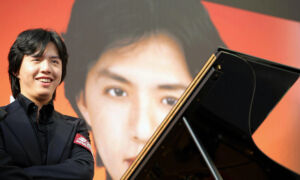 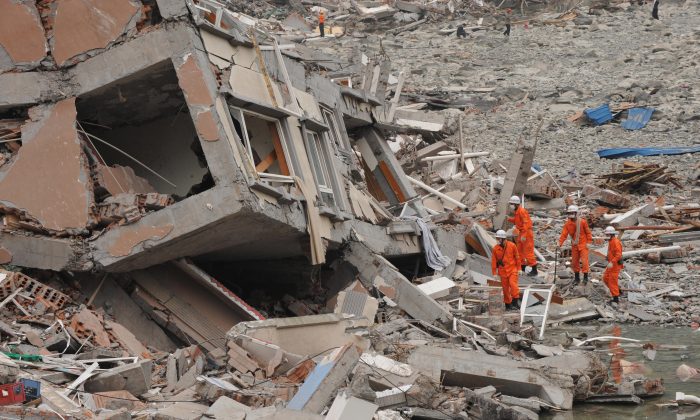 Rescue workers prepare to search a collapsed building at the earthquake damaged town of Beichuan in Sichuan Province on May 17, 2008. (Mark Ralston/AFP/Getty Images)
Chinese Regime

Nine years after the devastating earthquake in southwestern China’s Sichuan Province in 2008, there are still stories of victims struggling to get back on their feet. Now as China’s anti-corruption campaign presses onward under Chinese leader Xi Jinping, it becomes clear that corruption has held back recovery in the region.

On Nov. 15, Zhang Min, a section chief of the Industrial Park Construction Group, an agency within the Shandong provincial government set up for the purpose of supporting recovery efforts in the earthquake-hit region of Beichuan County in northern Sichuan Province, was sentenced to 11 years in prison and fined 300,000 yuan (about US$45,290), reported state-run Legal Daily.

The People’s Court in Lixia District, located in Shandong’s capital of Jinan City, found Zhang guilty of abuse of power and accepting bribes. His accomplice, Yang Yingneng, a businessman, was convicted of offering bribes and was sentenced to 11 years.

Shandong’s Industrial Park Construction Group, in collaboration with the Beichuan local authorities, was tasked with encouraging companies to invest in an industrial park in Beichuan. The agency offered companies land inside the park to develop, free of charge, as well as a financial grant totaling 20 percent of the value of their fixed asset investments.

Yang had approached Zhang with 300,000 yuan (about US$45,200) in cash. Zhang agreed to help Yang take advantage of an incentive-laden construction scheme. First, Yang set up a shell company, with the help of Zhang’s girlfriend, and got approval to build a factory inside the industrial park—to use 14,540 square meters (about 3.59 acres) of land for free. Then, Yang obtained from Zhang a financial grant of 6.85 million (about US$1.03 million) after building an empty factory furnished with a few items of production equipment for show. Together, the two repeated the same trick several times, while Yang siphoned off 10 million yuan (about US$1.5 million) from the agency’s coffer. In return, Zhang pocketed a total of 1.57 million yuan (about US$237,035) in bribes from Yang.

Zhang allowed three other companies to conduct the same scheme, and in return he took bribes amounting to 550,000 yuan (about US$83,035).

Zhang’s corruption is likely a small portion of the total that occurred. According to a report by Chinese news portal Sina published in May 2016, out of 65.2 billion yuan (about US$9.8 billion) in collected domestic donations for the Sichuan earthquake, details about how the money was spent were publicly disclosed for only 15.1 billion yuan (about US$2.2 billion). There was no public record of how the remaining 50.1 billion (about US$7.56 billion) was spent.

Many earthquake victims continue to struggle to survive, as financial help from the Chinese authorities has come very slowly. According to article by Hong Kong newspaper HK01 in May, Wu Xianqiong, a resident in Dujiangyan City in Sichuan was finally placed in a home by the local authorities after spending the past nine years living in an emergency shelter.

“Besides the natural disaster, we are being hurt for the second time, but it is manmade this time around,” said Lin.