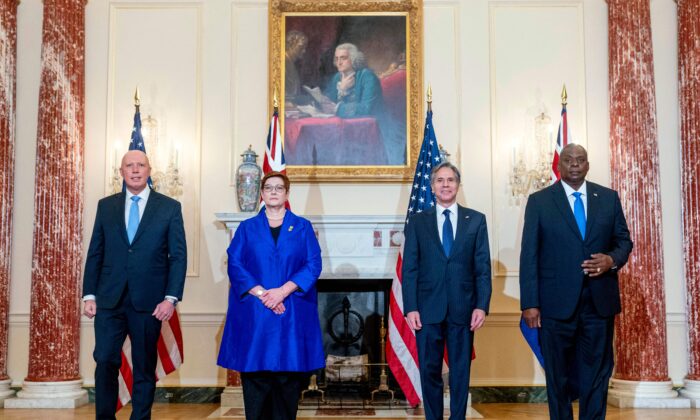 Canada was left out of a new defence pact between the United States, Australia, and the UK, which was announced on Sept. 15.

Dubbed AUKUS, the agreement seeks to “deepen diplomatic, security, and defense cooperation in the Indo-Pacific region,” according to a statement by the White House.

Party leaders were asked about the pact as they were campaigning in different parts of Canada in the final week before the election.

Liberal Leader Justin Trudeau downplayed the exclusion of Canada from the pact during a campaign stop in Montreal on Sept. 16.

“We continue to be strong members of the Five Eyes, and continue to share information and security approaches with our partners,” Trudeau said when asked if Canada will lose in terms of defence intelligence if it’s not part of the alliance.

Trudeau said that the deal was mainly about Australia’s decision to acquire nuclear submarines, as the country gets increasingly nervous about China’s ambitions in its backyard.

“This is a deal for nuclear submarines, which Canada is not currently or any time soon in the market for; Australia is,” Trudeau said.

“That is what we will continue to work alongside our partners to ensure—that we’re keeping ourselves safe, that we’re standing up against challenges, including those posed by China.”

The AUKUS agreement will see Australia, the UK, and the United States sharing information and technology, including the integration of “security and defense-related science, technology, industrial bases, and supply chains,” according to the White House.

Conservative Leader Erin O’Toole blasted Trudeau for the failure to join the alliance despite Canada’s standing as a member of the Five-Eyes, an intelligence alliance that includes Australia, Canada, New Zealand, the UK, and the United States.

“This is another example that Mr. Trudeau is not taken seriously by our friends and allies around the world,” O’Toole said during a campaign stop in Saint John, New Brunswick, on Sept. 16.

“This is another major gathering of our closest allies that Mr. Trudeau is not even given a phone call.”

He went to say that Canada has become “irrelevant” under Trudeau’s leadership.

O’Toole said if elected he would contact other leaders in the AUKUS alliance to push for Canada’s membership in the pact.

“We need to be part of those discussions,” he said, referring to the defence talks as well as discussions on global trade, security, cybersecurity, human rights and other issues impacting Canada.

NDP Leader Jagmeet Singh accused Trudeau of missing an opportunity to press China to release Michael Kovrig and Michael Spavor, two Canadians that have been arbitrarily detained in China for over 1000 days.

“Canada should have been part of the pact,” Singh said. “This pact seems like a potential avenue to apply more pressure, but Canada was absent.”