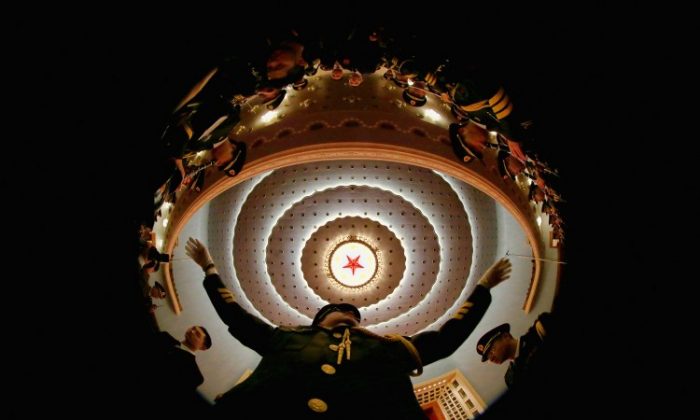 A conductor of a military band performs during a rehearsal before the opening session of the Chinese People's Political Consultative Conference in Beijing's Great Hall of the People on March 3. The Chinese regime's military budget has shot up in recent years as the Party buys the loyalty of PLA leaders. (Feng Li/Getty Images)
China

The military budget of the People’s Republic of China continues to shoot upward, in part reflecting the costs the CCP’s leaders must pay for control of the armed forces.

In 2013, the PRC spent US$116 billion on their military, a 10.7 percent increase from 2012. This double-digit rate of increase in military spending over the past 10 years has made the PRC one of the largest military spenders in the world, second only to the United States. The current military budget in China is now 30 times what it was 30 years ago.

According to the Hong Kong-based Apple Daily, neither Jiang Zemin nor Hu Jintao, each a former leader of the Chinese Communist Party (CCP), had enough experience or prestige to command the military’s loyalty. Their only option for gaining and maintaining control was to use promotions and rewards.

Jiang Zemin was able to control the military by promoting a lot of high-ranking officers who were loyal to him, and this number increased multiple times during his reign. The heated buying and selling of positions in the military was common knowledge at that time. The current rate varied with the market as buyers and sellers bargained for the best deal.

After Hu came to power in 2004, in addition to continuing to promote officers for their fealty, he authorized significant pay raises for the entire military three times. In July 2006, every person in the military received an increase, which more than doubled salaries at that time. In 2010, salaries were nearly doubled again, and the raises were made retroactive from July 2008. (http://bbs.junzhuan.com/thread-1719424-1-1.html)

Apple Daily reports indications of another raise coming in June of this year. If so, it looks like Xi Jinping, the new leader of the CCP, will also resort to buying the military’s loyalty.

Hu Jun from Human Rights Campaign in China believes that the increase in military spending also means an increase in the spending to “stabilize society”—the CCP jargon for using paramilitary police to put down any popular protests. This could potentially “intensify social conflicts and unnecessarily burden the lower and middle classes with an extortionate tax rate,” said Hu, who worries that a social uprising could be imminent.

Translated by Hsin-Yi Lin. Written in English by Barbara Gay.