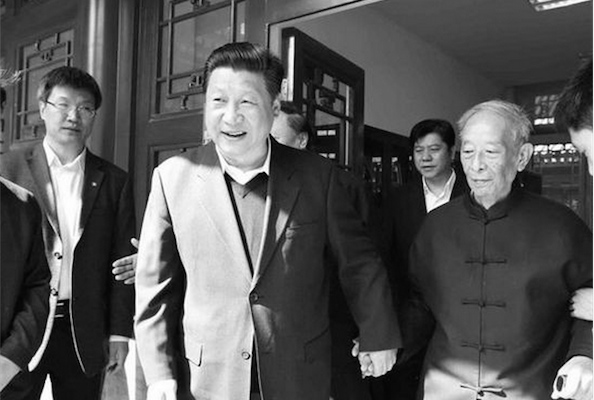 Chinese Communist Party leader Xi Jinping holds the hand of Tang Yijie, an 87-year-old professor of philosophy at Peking University, on May 4. Tang was a known supporter of the student movement in 1989. (Screenshot via Xinhuanet.com)
China

Chinese Communist Party leader Xi Jinping may not have as hard a line attitude on the Tiananmen Square massacre as widely thought, judging by recent statements by a Chinese blogger who appears to act as an unofficial mouthpiece for Xi and some of his allies, plus Xi Jinping’s call at the house of a retired professor, and his father’s own political stance.

On June 3, the insider blogger “Niu Lei,” who maintains a profile on the Duowei News website, wrote, “Xi Jinping has no reason to carry the baggage of June 4. He also won’t simply let June 4 be an embarrassment for the Communist Party every year.”

The “Niu Lei” blog appeared in 2012, during the crisis between former Politburo member Bo Xilai, his deputy Wang Lijun, and the then-leadership of Hu Jintao and Wen Jiabao, former Party leader and former premier respectively, and Xi Jinping, who at that time was the Party chief in waiting. Analysts suspect that he writes on behalf of that clique of leaders, as an unofficial channel for them to expose certain ideas, and in so doing guide public opinion in ways that are favorable to their interests. “Niu Lei” has on a number of occasions published—whether divulged or predicted is unclear—information that later was shown to be true.

The article said that Xi Jinping will attempt to “find a political way to solve this historical issue fundamentally.”

That itself may not be a hoped-for full accounting of the atrocity, of course, given how the Communist Party has traditionally dealt with its historical crimes.

The official conclusion on Chairman Mao Zedong, for example, reached in the “Resolution on Certain Questions in the History of Our Party Since the Founding of the People’s Republic of China” says that Mao’s “contributions to the Chinese revolution far outweigh his mistakes.” This is despite Mao being responsible for the unnatural deaths of tens of millions of Chinese.

But there are other signs that Xi may have a conciliatory inclination about the slaughter of unarmed youth in 1989.

On May 4, Xi called in on the well-known professor of philosophy Tang Yijie, during his official visit to Peking University. The 87 year-old Tang is known to have been active during the student movement in 1989, signing a joint appeal with other scholars that called on the Party to release political prisoners. Following Xi’s visit the Party mouthpiece Xinhua prominently ran photos showing Xi grasping Tang’s hand and engaging in conversation.

Simple matters like official visits, or attendance at public events like memorials, funerals, and official meetings, are all ways that Chinese people and political analysts read which way the wind is blowing on sensitive political questions. The repressive media environment and political sensitivities surrounding certain questions in the Party means that top Party officials and their family members often use symbolic actions to demonstrate their stance.

Hu Yaobang, a liberal-minded and reform-oriented leader, was the general secretary of the Communist Party from 1982 to 1987, but was shunted by an informal group of other leaders who considered him insufficiently hardline. When Hu Yaobang died two years later, in April of 1989, it was the gatherings to commemorate his death that coalesced into the Tiananmen student movement that occupied the square until the bloody crackdown of June 4.

Xi Jinping’s father, Xi Zhongxun, was said to have strongly opposed the ouster of Hu Yaobang.

Jia Juchuan, author of Biography of Xi Zhongxun explained this in an interview with Chinese reporters in October 2013. During a Politburo meeting in early 1987, Li Peng started to criticize Hu Yaobang. Xi Zhongxun thumped the table and said: “What are you doing? Aren’t you trying to force the leader down?” Hu Yaobang was in any case dismissed from the general secretaryship, though Xi Zhongxun opposed it. Jia Juchuan said his account came from historical documents and extensive interviewing.

Xi Jinping shares a close relationship with Hu Yaobang’s eldest son, Hu Deping. During Hu Deping’s visit to Japan this April, Japanese media reported that the visit was because of his close ties with Xi Jinping. The two are known to have ties before Xi became Party leader, according to Reuters. Reuters reported that Xi visited Hu Deping to discuss the Bo Xilai case, sometime between July and September.

If Xi indeed harbored more liberal views on acknowledging the Party’s fault around the Tiananmen massacre, this would constitute a contrast with the position taken by former regime leader Jiang Zemin, who held power from 1989, and exerted influence over policy and governance in China well into the reign of his successor, Hu Jintao.

Jiang Zemin rose to power in large part because of his resolute and proactive suppression of protests in Shanghai. Jiang fired the editor of a newspaper in Shanghai that marked Hu Yaobang’s death, and later made heavy use of newspapers in Shanghai to propagandize the Party line that the student protests were a “counterrevolutionary riot.”

Along with Hu Yaobang, another sensitive name is Zhao Ziyang, who succeeded Hu in leading the Party, at least officially. (Deng Xiaoping was in both cases the real power behind the throne). Zhao was also oustered, after he failed to adopt a hard-line stance on the students gathered in Tiananmen Square. He was soon put under house arrest, where he remained until his death in 2005.

Though Zhao had been made a political outcast, Xi Jinping’s mother, Qi Xin, sent a bouquet to his funeral in her own name and that of her children. Such acts are taken by Chinese people as statements of a political stance—in this case, a brave expression of sympathy with Zhao Ziyang, given the situation.

What Xi Jinping’s real intentions are around the Tiananmen issue remain unclear. Rowena He, who teaches a course on the Tiananmen movement at Harvard, said, “Actions are louder than words,” in responding to a question about Xi’s stance, by a reporter at a recent talk.

Many human rights activists point to the recent round-ups, beatings, and prison sentences for dissidents in China, including a rolling purge leading up to June 4.

“Niu Lei” attempts to exculpate Xi, saying that the purpose of the crackdown is “maintaining stability.” Besides, “Niu Lei” wrote, Xi cannot yet redress June 4, for complex political reasons, including the amount of resistance such a move would face in the Party at present. The implication seemed to be that that may change in time.

Correction: According to Reuters, Xi Jinping, the current Communist Party leader, met with Hu Deping, the son of former Party leader Hu Yaobang, “in the past six weeks” before Sept. 7, 2012—not necessarily between “Sept. 1 and Sept. 14,” as originally stated.