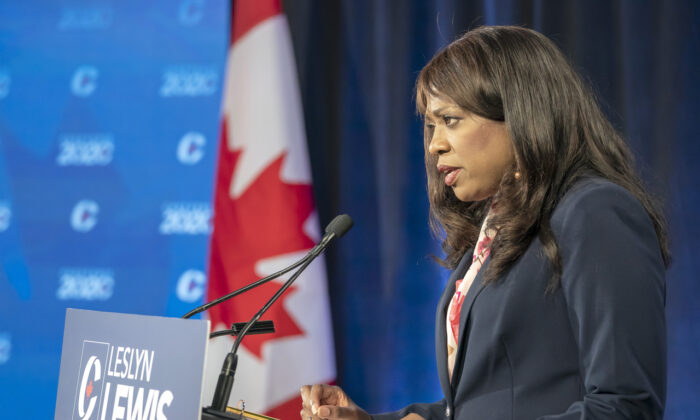 Conservative MP Leslyn Lewis is getting support from some Conservative Party insiders as she challenged the federal government’s announcement of a roadmap for providing a COVID-19 vaccine for children aged 5 to 11 children.

Currently, the Pfizer-BioNTech and Moderna COVID-19 vaccines are only available for children 12 and older. Earlier this month, Pfizer asked Health Canada to approve its vaccine for children between the ages of 5 and 11.

Prime Minister Justin Trudeau said on Oct. 21 that the vaccine will only be made available to children once Health Canada has gone through all approval processes and the vaccine is proved to be safe. He added that Ottawa has worked with Pfizer to make millions of doses available for children shortly after it’s been approved, “enough to get all kids … between 5 and 11 vaccinated as quickly as possible.”

“Never have Canadian children been used as shields for adults,” Lewis said in reaction to Trudeau’s comments.

“Parents question vaccinating kids 5-12 without long-term data, a low risk of fatality, & cautions echoed around the world, when the treatment neither prevents transmitting or getting the virus,” she wrote on Twitter.

Never have Canadian children been used as shields for adults. Parents question vaccinating kids 5-12 without long-term data, a low risk of fatality, & cautions echoed around the world, when the treatment neither prevents transmitting or getting the virus. https://t.co/GwQWy7NRd1

Lewis’s comment drew criticism from members of the Liberal Party and others.

“Vaccines are safe and effective. They’re how we end this pandemic. And yet Erin O’toole’s [sic] Conservatives continue to spread misinformation while many of their own caucus members refuse to get vaccinated,” Liberal MP Jennifer O’Connell wrote on Twitter.

“It turns out that we don’t need to elect PPC [People’s Party of Canada] candidates for this dangerous nonsense to be represented in the House of Commons,” Liberal MP Nathaniel Erskine-Smith tweeted.

“Hope? History repeating? A black woman letting a majority white male power structure know that she won’t be told where to sit on Covid issues. As she will now begin to face a relentless, media generated hell of scorn will there be a man (or woman) who stands with her?” Day wrote on Twitter.

“I will not stay silent either, Leslyn. I stand with you,” he tweeted.

I will not stay silent either, Leslyn. I stand with you. https://t.co/rU0XJeunJb

Among the latest development in the Conservatives’ position on COVID-19 vaccine mandates is their stance on mandatory vaccination policy for MPs.

“While we encourage everyone who can be vaccinated to get vaccinated, we cannot agree to seven MPs, meeting in secret, deciding which of the 338 MPs, just elected by Canadians, can enter the House of Commons to represent their constituents,” Richards said in a statement.

Conservative Leader Erin O’Toole appeared to contradict that position in an interview with TVO’s Steve Paikin that was aired on Oct. 20, saying his party will respect the decision made by the BOIE, while expressing concern about division in society and those losing their jobs if they don’t get vaccinated.

O’Toole later seemed to backtrack his stance on the policy, saying it “infringes” on parliamentarians’ rights.

Conservative MP Michael Chong told CTV on Oct. 9 that the party is evaluating the government’s mandatory vaccine policy before taking a position on the issue.

The government announced on Oct. 6 that it will make COVID-19 vaccination mandatory for employees of core public services, along with air and rail workers and travellers, by Oct. 29.

Conservative MP Mark Strahl said on Oct. 8 that the vaccine mandate is “discriminatory, coercive and must be opposed.”

“We must continue to demand reasonable exemptions and accommodations, like rapid testing, for those unable or unwilling to be vaccinated,” he said on Twitter.