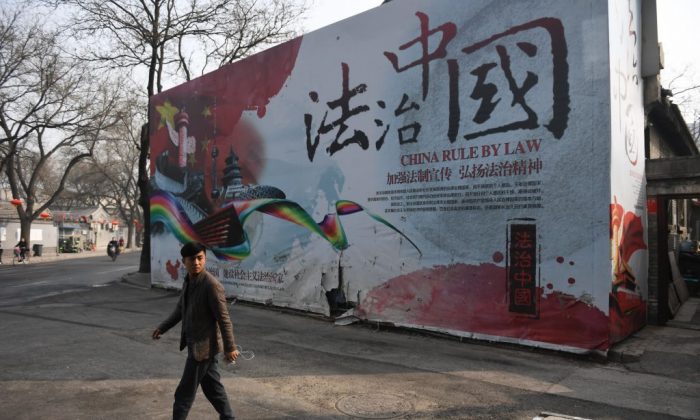 A security guard walks past a billboard with propaganda about rule of law in China on March 13, 2018. (Greg Baker/AFP/Getty Images)
Chinese Regime

A recent announcement from China’s bar association reveals that the Chinese regime will now keep lawyers on a tight leash.

All China Lawyers Association (ACLA), a state-controlled bar association established in 1986 under the authority of the Ministry of Justice, held its ninth national meeting on July 1. The meeting is held every four years, mainly for the purpose of selecting new leadership to run the association.

Currently, the association is headed by Wang Junfeng, a lawyer and a former delegate to the National Committee of the Chinese People’s Political Consultative Conference (CPPCC), a largely ornamental political advisory body to the central government.

This year, the association made amendments to its charter by adding Party ideology, according to a July 2 post on the ACLA’s website.

The new charter now includes the principle that “socialism with Chinese characteristics in the new era under Chinese leader Xi Jinping” will serve as a guideline for its member lawyers. Additionally, members must “uphold the authority of central authorities with Xi Jinping as the core leader.”

In other words, the charter calls on member lawyers to follow Xi’s party doctrine, which was enshrined into the Chinese Communist Party’s constitution in October 2017 during the 19th National People’s Congress. Xi is the only leader aside from Mao Zedong to have his name attached to an ideology in the Party constitution while still in power.

The bar association’s decision to include this provision in their charter is an escalation of Party control over the legal profession. In recent years, scores of lawyers have been the target of persecution by the Chinese regime due to their work for clients who are abused by Chinese authorities, most notably in July 2015 when hundreds were rounded up nationwide in an attempt to intimidate them into silence.

Speaking at the meeting, Fu Zhenghua, China’s justice minister, made it clear that lawyers would have to toe the Party line: member lawyers should “listen to the Party” and “follow the Party,” he said, adding that individuals making “inappropriate remarks” that could affect the entire profession would also be strictly prohibited.

Outspoken critics of the Chinese regime, such as human rights lawyers Wang Yu and Jiang Tianyong, have been arrested and detained multiple times.

“This is a step back for democracy in China,” said Zou Huili, a Chinese lawyer, in an interview with Radio Free Asia (RFA) about the new charter change.

Peng Yonghe, a lawyer based in Shanghai, explained that in China, where “the Communist Party dictates all aspects of society” and there is no true separation of powers, inherent conflicts between rule of law and political ideology are seen as threatening to the Party’s rule.

On July 2, Chinese state-run media Xinhua reported that more and more lawyers were becoming members of the Chinese Communist Party (CCP), citing data provided by the ALCA at a meeting in February.

Currently, Party committees have been set up at local lawyer associations in 31 provinces, regions, and municipalities, according to Xinhua. These committees are set up at workplaces, organizations, and schools to monitor citizens’ activities and ensure they follow Party policies.