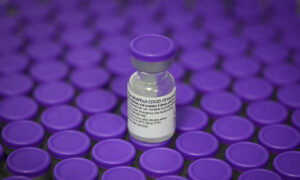 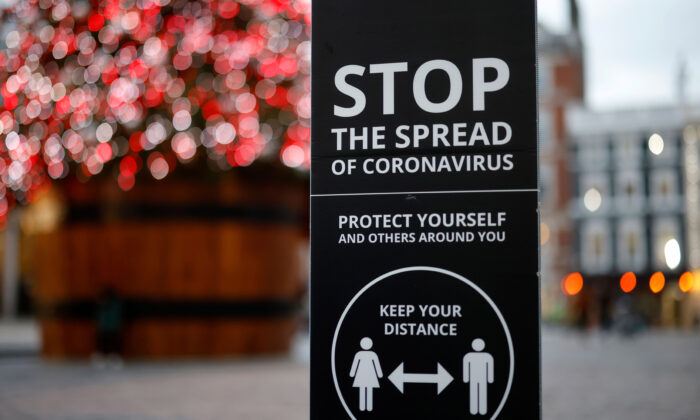 A sign promoting social distancing to combat the spread of the CCP virus is seen beside the Christmas tree in Covent Garden in central London on Nov. 27, 2020. (Tolga Akmen/AFP via Getty Images)
UK

Parts of England to Spend Christmas in Full Lockdown

For the rest of the country, the previously agreed five-day period to allow up to three households to meet has been reduced to Christmas Day only.

“It is with a very heavy heart I must tell you we cannot continue with Christmas as planned,” said Johnson during a briefing.

“Although there’s considerable uncertainty, it may be up to 70 percent more transmissible than the old variant, the original version of the disease,” Johnson said.

“This is early data and it’s subject to review. But it’s the best that we have at the moment and we have to act on information as we have it, because this is now spreading very fast,” the prime minister added.

Regions most affected by the new variant will enter Tier 4 on Sunday.

These regions are: Kent and Medway, Buckinghamshire, Berkshire (Bracknell Forest, Reading, Slough, Wokingham, Windsor and Maidenhead, and West Berkshire), Surrey (excluding Waverley), Hastings and Rother, Havant, and Gosport and Portsmouth from South East England; Hertfordshire, Essex (excluding Tendring, Uttlesford, and Colchester), Central Bedfordshire, Bedford, Milton Keynes, Luton, and Peterborough in the East of England; and all 32 London boroughs plus the City of London.

Johnson said the restrictions in Tier 4 will be broadly equivalent to the national lockdown in England in November.

People in Tier 4 will have to stay at home except for limited exemptions, and individuals can only meet one person from another household in an outdoor public space.

Travelling in and out of Tier 4 areas is prohibited, and residents in Tier 4 areas will not be permitted to travel abroad, apart from limited exceptions such as for work purposes.

“In England, those living in Tier 4 areas should not mix with anyone outside their own household at Christmas,” Johnson said. “Support bubbles will remain in place for those at particular risk of loneliness or isolation,” he added.

“Across the rest of the country, the Christmas rules allowing up to three households to meet will now be limited to Christmas Day only rather than the five days, as previously set out.”

Johnson also asked people in all tiers “to stay local.”

He reiterated that there’s currently no evidence to suggest the new variant affects the severity or the mortality rate of the disease, or the effectiveness of vaccines.