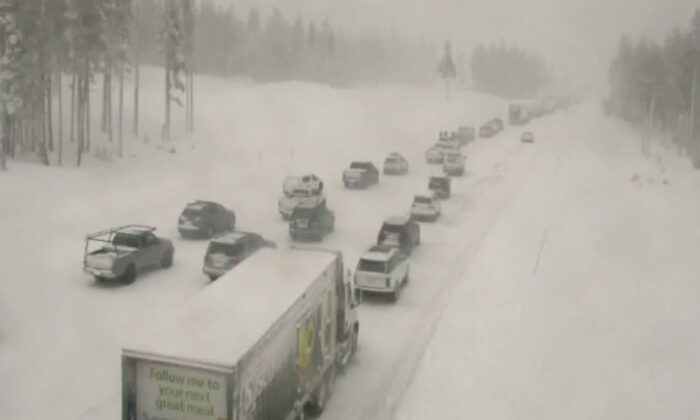 Traffic is stopped along a snow-covered Interstate 80 at Donner Summit, Calif., on Dec. 23, 2021, in a still from a Caltrans remote traffic camera video. (Caltrans via AP)
US News

Parts of California Get a White Christmas After Snowfall

LOS ANGELES—Parts of California are getting a White Christmas after all, with snowfall pounding mountains across the state.

Other areas of California, however, saw a wet and rainy Christmas as storms continue to drench the state, causing flash flooding and evacuations in some areas over the holiday period.

At Donner Pass in the Sierra Nevada, officials with the University of California–Berkeley’s Central Sierra Snow Laboratory wondered on Twitter if the recent snowfall could break the snowiest December record of 179 inches (4.6 meters) set in 1970.

There’s been at least 119 inches (3 meters) recorded so far this month, according to The Mercury News, with more expected over the next 72 hours.

The snowpack in the Sierra was at dangerously low levels after recent weeks of dry weather, but the state Department of Water Resources reported on Christmas Eve that the snowpack was between 114 percent and 137 percent of normal across the range with more snow expected.

In the San Bernardino National Forest, crews are working on a $4.2 million emergency project to repair a section of State Route 18 that washed down a hillside late Thursday after heavy rain, according to The San Bernardino Sun.

The roadway is a major route to Big Bear Lake and the closure near Panorama Point could be “several days if not weeks,” the newspaper reported.

The Los Angeles area is likely to see rain and mountain snow for the next week, according to the National Weather Service, with temperatures significantly below normal through the middle of the week.

The San Diego region should see scattered showers, with heavy snow in the San Bernardino and Riverside County mountains, with precipitation possibly going into Thursday.

Meanwhile, the San Francisco Bay Area is predicted to have rain showers through Monday before cold and drier conditions arrive through the middle of next week, the weather service said.

The storms across the West, which could drop rain and snow over much of the region into next week and plunge the Pacific Northwest into a lengthy cold snap, follow a now-departed atmospheric river that delivered copious amounts of precipitation earlier this week.

Rain and snow records broke in Nevada, and state officials in Oregon declared an emergency ahead of the freezing temperatures, snow, and ice.

Recent forecasts show at least an inch of snow is likely to fall Sunday in the Seattle and Portland regions, which don’t typically see snow.

But forecasters and state officials say the main concern is cold temperatures in the region—with daytime highs next week struggling to reach above freezing—that are likely to impact people experiencing homelessness and those without adequate access to heating.

In Arizona, a winter weather advisory remained in effect Saturday through the weekend in the upper elevations of the mountains north of the Grand Canyon near the Colorado line. But the wet weather that dumped record-breaking rain on Phoenix and Flagstaff on Friday was moving out of the area.