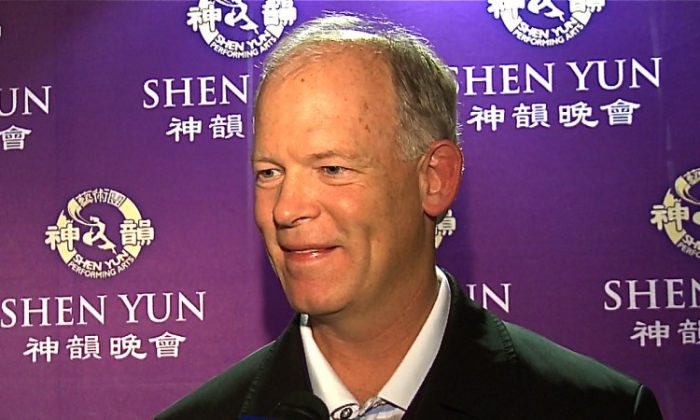 “I thought it would be a wonderful dance event, but now I find that it’s so much more,” he said.

Mr. MacDonald, a lawyer at top personal injury law firm Thomson Rogers, said he was impressed by the many different elements in the show staged at the Living Arts Centre on Thursday night.

“The athleticism, the spirituality, there’s a great message and the singing was just above and beyond,” he said.

Mr. MacDonald, who took his wife and son to see the show, was appointed by the Minister of Finance of Ontario as the authorized representative of injured persons in the province and a member of the Executive Committee to the Superintendent of Insurance for the Province of Ontario’s Auto Reforms Implementation Committee.

Mr. MacDonald said he found it very inspirational that some dances portrayed freedom and standing up for one’s beliefs despite oppression.

“I think that that was inspiring not only to the Chinese culture, but also to us Canadians,” he said.

“Principles such as benevolence and justice, propriety and wisdom, respect for the heavens, and divine retribution, all come to life, washing over the audience,” the company’s website reads.

According to the site, reverence for the divine was the heart and soul of traditional Chinese culture. These traditions, however, were oppressed during the Cultural Revolution in China by the Chinese Communist Party which set out “to destroy not only cultural sites, temples, and relics, but also the Chinese people’s belief in virtue and faith in the divine.”

Mr. MacDonald said it was interesting to know Shen Yun staged an all-new program each year and said he will definitely come to see the show next year.

Since 2006, Shen Yun has been touring the world, bringing its production to over 100 cities.