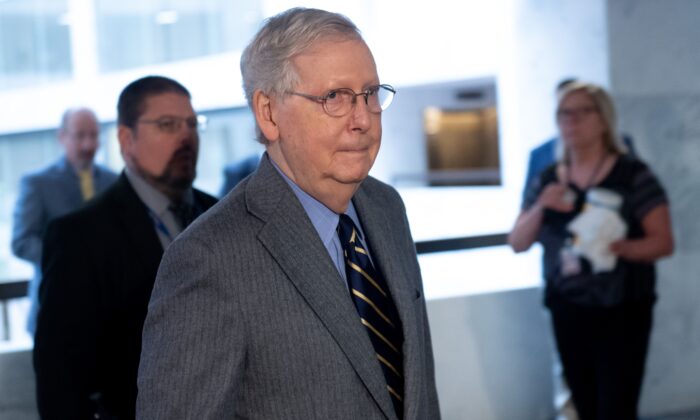 WASHINGTON—Senate Republican and Democratic leaders ripped each other on the Senate floor March 23 as a $2 trillion economic stimulus package stumbled amid intense partisan bickering.

“Are you kidding me?” Senate Majority Leader Mitch McConnell (R-Ky.) demanded, during an impassioned floor speech. “This is the moment to debate new regulations that have nothing to do whatsoever with this crisis?”

McConnell continued, saying: “Here are some of the items on the Democratic wish list over which they choose to block this legislation last night. Tax credits for solar energy and wind energy. Provisions to force employers to give special new treatment to Big Labor. And listen to this: New emissions standards for the airlines,” McConnell said.

“That’s what they’re up to over there and the American people need to know it. Democrats won’t let us fund hospitals or save small business unless they get to dust off their Green New Deal,” he said.

“The bill still includes something that most Americans don’t want to see. Large corporate bailouts with almost no strings attached,” Schumer said, claiming the relief package allows corporations to receive billions of dollars of loans and other assistance with no public accountability.

Still, Schumer declared that “we’re very close to reaching a deal, very close, and our goal is to reach a deal today, and we’re hopeful, even confident that we will meet that goal.”

The conflict followed a 47–47 essentially party-line vote on March 22 that prevented the Senate from limiting debate on the package and holding a final vote on it possibly as early as March 24.

The debate-limiting motion required 60 votes to pass. With all of the Senate’s Democrats voting against it, the motion would have failed even if five Republican senators weren’t absent due to self-quarantining as a result of the CCP virus.

The failure of the motion sparked an outpouring of negative media headlines, led by The New York Times, which declared, “Emergency Economic Rescue Plan in Limbo as Democrats Block Action.”

In the story, the NY Times stated, “In voting to block action, Democrats risked a political backlash if they are seen as obstructing progress on a measure that is widely regarded as crucial to aid desperate Americans and prop up a flagging economy.”

McConnell pointed to a statement by House Majority Whip Rep. Jim Clyburn (D-S.C.) to explain why Senate negotiations that had been bipartisan and seeming to move toward a quick resolution took a sudden partisan turn over the weekend.

“Remember what one of Speaker Pelosi’s top lieutenants said just a few days ago and this is a direct quote: ‘This is a tremendous opportunity to restructure things to fit our vision.’ That was the Democratic Whip in the House just laying it out there.”

There was no agreement among Democratic and Republican strategists interviewed March 23 by The Epoch Times on the reasons for the partisan blowup.

Jim Manley, former communications director for then-Senate Majority Leader Harry Reid (D-Nev.), said “the idea that Senate Republicans are criticizing Speaker Pelosi is as pathetic as it is wrong. The fact of the matter is that at the beginning of this latest series of negotiations, McConnell made it very clear that he didn’t want Pelosi involved.”

Manley added that “the idea that he just thought that House and Senate Democrats would just swallow this $500 billion slush fund without any oversight showed me that he really wasn’t interested in cutting a bipartisan deal.”

Robert Weissman, president of the liberal advocacy group Public Citizen, dismissed the idea that Democrats could suffer from a voter backlash due to blocking the bill on March 22.

“First of all, there is almost certainly going to be a deal. By November, no one will worry about whether it happened on Sunday night or Monday or Wednesday, or even remember” the vote at all.

“Second, the Democrats are demanding protections for workers and accountability for bailouts. That’s both right on the merits and almost certain to be well received by voters,” Weissman said.

But Citizens Against Government Waste (CAGW) President Tom Schatz disagreed, arguing that “Speaker Pelosi and Minority Leader Schumer should be ashamed of themselves for failing to agree to the legislation that Senate Democrats negotiated over the past week.”

Now, Schatz said: “Republicans negotiated in good faith on the coronavirus legislation with their Democrats colleagues. They should keep up the pressure for Democrats to agree to move the bill to the floor expeditiously and get it enacted into law.”

Brian Darling, former counsel to Sen. Rand Paul (R-Ky.), warned: “This is one of those rare moments in politics where the voters really want to believe that Congress is working to solve a problem. Blocking a bill because Democrats want more in a bill that has already ballooned to $2 trillion is politically dangerous and risky.”

And Grover Norquist, president of Americans for Tax Reform (ATR), claimed that “Democrats are not just playing politics, they are holding needed legislation hostage for more earmarks directing billions to their favorite political friends, who will be expected to return the favor in campaign contributions.”

Taxpayers Protection Alliance President David Williams suggested: “It may be time to do this legislation piecemeal by immediately providing relief to small business and individuals and extending unemployment benefits. If they do this, they still need to address the financial impact on ‘distressed industries.’ Doing nothing is unacceptable.”

Williams said, “It appears that Senate Majority Leader McConnell negotiated in good faith with Sen. Schumer, so it’s easy to see why the blame is being placed on Democrats.”