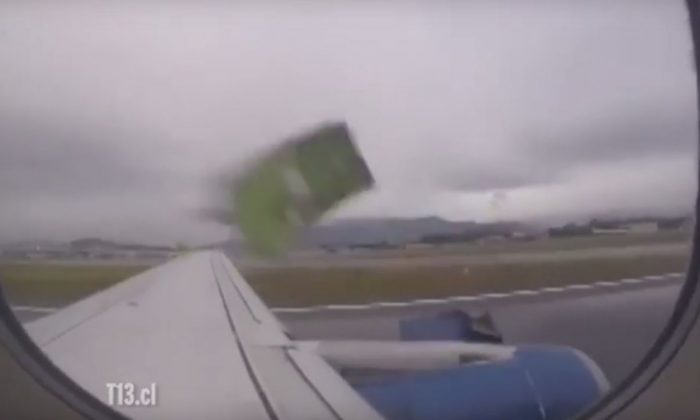 Part of Engine Falls Off Plane During Takeoff in Chile

A passenger became the accidental witness of a plane engine literally falling apart during takeoff.

The Sky Airline flight from Santiago, the Chilean capital, to Copiapo, had to make an emergency landing on Thursday after a panels on the engine were torn loose, according to the Telegraph.

The moment was captured by a passenger right before it went into the air.

The passengers were placed on another flight after the plane landed safely at the airport.

According to the Aviation Safety Network, it’s the 39th incident involving the loss of an engine cowl door on an Airbus 320-type aircraft.

Sky Airline was founded in 2001 and is now Chile’s second-largest carrier.

The footage will probably scare fliers, said Patrick Smith, a pilot and the author of “Cockpit Confidential.”

“A portion of the engine cowling became unlatched – because perhaps it was not latched properly to begin with, got caught in the windstream and was torn off,” he was quoted by the Telegraph as saying. “The cowling section itself is nothing immediately critical; it’s just a cover.”

He added: “You can compare it, maybe, to the bonnet that covers the engine in your car. Damage to the engine wasn’t the problem. The danger was in the piece striking some other portion of the airframe as it sheared away – namely the wings, the tail, or the aft stabilizers. An impact with the stabilizers, for example, could have been extremely hazardous. However, the slipstream lifted the piece well clear of these areas. From that point there was little or no danger.”