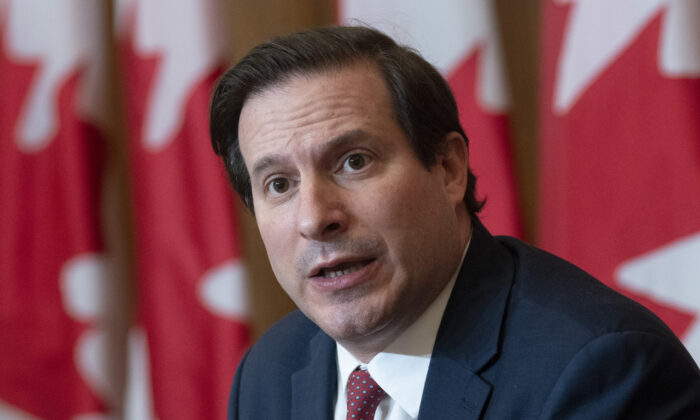 Public Safety Minister Marco Mendicino says there will be a review of the Parole Board of Canada’s previous decision to release a suspect in the mass stabbing in Saskatchewan.

Mendicino told reporters in Vancouver on Sept. 6 that he has already had discussions with the parole board and that he was told there will be an investigation into the decision to release Myles Sanderson.

“I’m extremely concerned with what occurred here,” he said when asked if he thinks a review of the decision is needed.

“There will be an appropriate time and a place to review policy and resourcing and we need to embrace that review. We need to be transparent with Canadians to make sure that this kind of thing never happens again,” he said, adding that the government’s current priority is to lend support to the victims’ families.

Sanderson, 30, is one of the two suspects who went on a stabbing spree at several locations on the James Smith Cree Nation and in the nearby village of Weldon, northeast of Saskatoon, on Sept. 4.

Before his release, Sanderson had been serving a federal sentence of more than four years for a slew of offences including assault, assault with a weapon, assaulting a peace officer, and robbery. Documents obtained by The Canadian Press showed he has 59 criminal convictions.

The documents said that the parole board decided to grant Sanderson statutory release with a reprimand in February after he had served two-thirds of his sentence. Under the terms of statutory release, federal offenders have some time under supervision in the community before their sentence ends.

In their decision, the parole board said that Sanderson “will not present an undue risk to society” and that the statutory release “will contribute to the protection of society by facilitating [his] reintegration into society as a law-abiding citizen.”

In May 2022, just months after his release, Sanderson was listed by the Saskatchewan police as “unlawfully at large” and was last seen in Saskatoon, about 200 kilometres southwest of the scene of the mass killings on Sept. 4.

Mendicino said there is a need to review how decisions on statutory release are made and enforced.

“At this stage it’s important that we keep all options on the table when it comes to looking at policies and laws and making sure that they work to protect communities,” he said. “Especially for those who are released back into the community, we’ve got to make sure that the laws work.”

The mass stabbing on the First Nation left 11 dead, including Sanderson’s brother, Damien Sanderson, who was also a suspect. A total of 18 people were also injured in the attacks. Police previously said some victims of the mass killings were targeted, while others were believed to be selected at random.

The manhunt for Sanderson is ongoing as the RCMP continues its search.