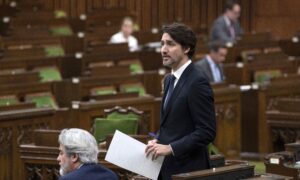 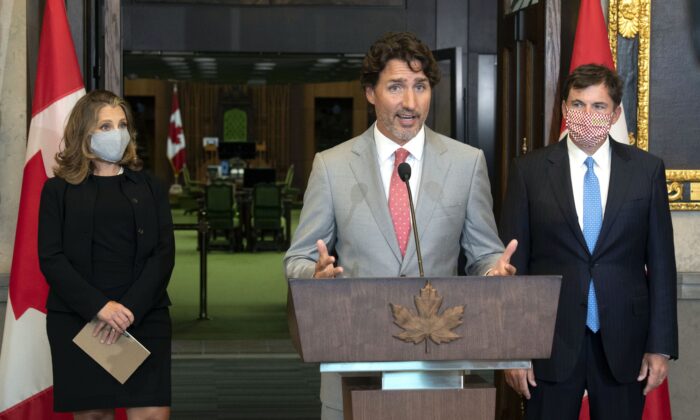 Prime Minister Justin Trudeau announces a cabinet shuffle at a press conference on Parliament Hill on Aug. 18, 2020. Looking on are Deputy Prime Minister and Minister of Finance Chrystia Freeland and President of the Queen’s Privy Council for Canada and Minister of Intergovernmental Affairs Dominic LeBlanc. (The Canadian Press/Adrian Wyld)
Viewpoints

The COVID-19 pandemic has wreaked havoc on the Canadian economy and society, costing lives and imposing unexpected financial and medical costs on people. It has exposed structural shortcomings in our economy and health care system—issues that will hopefully become more central to the political debate.

But that is only if these debates can be had.

While the crisis brought about by the pandemic tested the government’s competence, there is also a crisis of accountability as Parliament becomes less and less relevant.

The prorogation of Parliament until Sept. 23 is the apotheosis of a sequence of moves that have only weakened parliamentary scrutiny and eroded democracy.

As the pandemic was taking hold and its consequences were becoming apparent in March, the government put forth Bill C-13 which effectively would give it unlimited spending power until September (after initially requesting that power until 2021.) The move opened the way to spending billions of dollars without any oversight on the proper allocation of public finances during a serious economic downturn.

Of course, subsequent realities have shown that the give-and-take of the parliamentary environment is needed. The deficit is expected to balloon to $343 billion this year at last estimate, and this whopping increase hasn’t been accompanied with any cogent explanation of a plan to manage it. A budget is only supposedly now coming next month when Parliament returns, and one can only guess the answers it might provide.

Making matters worse is how debate has been stifled all summer as the number of parliament sit-ins have been reduced due to safety concerns over COVID-19.

Then there’s the issue of investigations into the WE Charity debacle, most the details of which are yet to be revealed. Prime Minister Justin Trudeau agreed to a 90-minute testimony at a parliamentary committee meeting on the scandal, but has been absent from parliamentary sessions to answer to the issue on other occasions.

Now, with Parliament prorogued, any further investigation into the WE affair is postponed indefinitely, as are committees concerned with such pressing issues as the Canada-China relationship—the government’s approach to which has often drawn criticism, and any debate on it is facilitated by op-eds and news articles.

All parliamentarians should forcefully object to the culture that has led to this predicament and acknowledge the need to rethink the structures that incentivize such behaviour. This might begin with reining in the power of leadership offices more generally; currently, their authority completely inverts the relationship between parliamentarian and constituent and makes much of parliamentary politics revolve around serving the interests of the party and its leader.

Consistent with much of his parliamentary work, in his 2017 leadership campaign, Conservative MP Michael Chong pledged that if he became prime minister he’d put forth a constitutional convention to end the “egregious abuses of Parliament” by Liberal and Conservative governments. He sought to rein in the Prime Minister’s Office to deter it from proroguing legislatures “to avoid votes of non-confidence and debates over scandals.”

It’s a vital time again to think seriously along these lines on how to not only revive Canada’s Parliament but strengthen it.