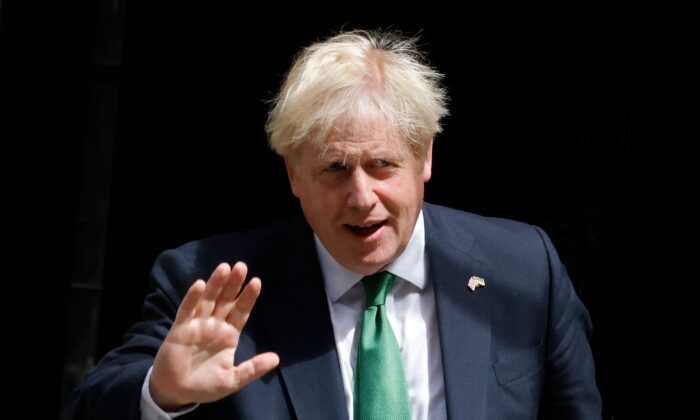 Britain's Prime Minister Boris Johnson waves while walking to a waiting car as he leaves from 10 Downing Street to head to the Houses of Parliament for the weekly Prime Minister's Questions, in central London, on July 13, 2022. (Carlos Jasso/AFP via Getty Images)
UK

Allies of British Prime Minister Boris Johnson have spoken out against who they consider part of a “witch hunt” by a parliamentary committee that could lead to the outgoing prime minister’s removal from Parliament.

Still Johnson’s detractors, including at least one MP inside Johnson’s own party, say that the work of the committee is fair and unbiased.

Johnson resigned as prime minister in July over a deluge of criticism that he lied to parliament over a number of issues, including holding parties in Number 10 Downing Street, when the rest of the country was in lockdown, known in the UK as Partygate.

Ultimately the PM was brought down after many of his colleagues came to the conclusion that he had misled them about his knowledge of the sexual misconduct of Chris Pincher MP, who Johnson had appointed to a cabinet position.

Johnson was fined by the London Metropolitan Police. He has always denied any criminal misdeeds.

The Committee of Privileges is a select committee set up by Parliament. One of its remits is to investigate wrongdoing by members of Parliament. It is now investigating whether Johnson broke rules parliamentary rules against public gatherings when sanctions were imposed during the CCP virus outbreak.

Lord Zac Goldsmith, the environment and international development minister, in an act of loyalty toward the outgoing British PM, called the committee “clearly rigged.”

“It is a jury comprised of highly partisan, vengeful & vindictive MPs, nearly all of whom are already on the record viciously attacking the person they are judging. It is an obscene abuse of power,” Goldsmith wrote on Twitter on Sunday.

Nadine Dorries, minister for culture, strongly criticised the work of the committee. “If this witch hunt continues, it will be the most egregious abuse of power witnessed in Westminster,” she wrote on Twitter. “It will cast serious doubt not only on the reputation of individual MPs sitting on the committee, but on the processes of Parliament and democracy.”

“Tories yet again want to normalise lying and abuse of power. If they do this they will be lashing themselves to the Johnson mast,” Byrant said on Twitter, referring to a report in The Guardian that some MPs want Boris Johnson to step down to prevent any further damage to the Conservative Party.

Ian Blackford, leader of the Scottish National Party, the third largest party in the House of Commons, responded to Dorries on Twitter.

“No this is Parliament and Parliamentarians doing their job and seeking to get to the truth,” he wrote. “Parliament has mandated the privileges committee to conduct this investigation, it must reach a conclusion and if judgements and sanctions are applied that would be right and proper.”

Some inside Johnson’s party support the work of the committee.

Laura Farris, a Conservative MP who resigned from the Committee of Privileges, has been critical of the PM in the past.

“I maintain confidence in the Committee, its members and the mandate given to it by the House of Commons,” she wrote on Twitter on Aug. 8. “I stepped down from the Committee last month. It is regrettable that no journalist spoke to me first,” Farris added.

The committee has been collecting data If they find that he lied to Parliament he could be suspended. The committee refused to comment on the particulars of any tweets. Under Parliamentary rules a ban of more than 10 days could cause a by-election if more than 10 percent of his constituents petition for it.