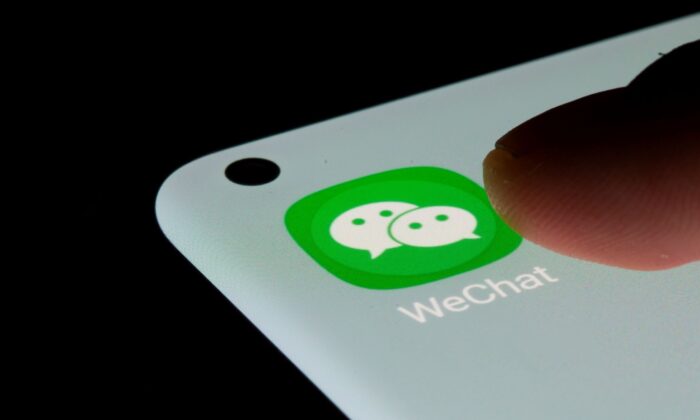 WeChat app is seen on a smartphone on July 13, 2021. (Dado Ruvic/REUTERS/Illustration)
Australia

Australian Prime Minister Scott Morrison’s official WeChat account has been hijacked and rebranded as a lifestyle page—leading one senator to accuse the Chinese Communist Party (CCP) of “foreign interference” during an election year. WeChat is a Chinese social media platform.

According to the Daily Telegraph, the agency running the prime minister’s WeChat account reported problems with posting content on the channel in mid-2021, when Morrison was attending meetings in the United Kingdom of the Group of Seven leading industrial nations.

Morrison had around 76,000 WeChat followers, but earlier this month, significant changes were made to the account without the knowledge of the prime minister’s team.

A search for a WeChat account under the name “Scott Morrison” by The Epoch Times yielded no results.

This has been the most substantial act of interference with the prime minister’s WeChat account, following an incident in December 2021, when the Chinese social media giant deleted a comment from Morrison.

“What the Chinese government has done by shutting down an Australian account is foreign interference of Australian democracy in an election year,” Paterson told 2GB radio on Jan. 24.

“It is very clearly government action in my view. No politician should be on WeChat and legitimizing their censorship.”

Paterson said it wasn’t “at all surprising” that the hijacking of the account and Morrison’s actions at the G7 were connected.

During the most recent meeting, the prime minister circulated a document to world leaders containing a high-profile list of 14 “grievances” against the Australian government that Chinese officials had “leaked” to media outlets in 2020.

The 14 grievances included complaints about Australia’s banning of Huawei from its 5G network, recent foreign interference laws, the government’s calls for an inquiry into the origins of COVID-19.

Meanwhile, Paterson revealed WeChat had been silent on requests from the prime minister’s team to restore access to the account.

“The government has directly appealed to WeChat to restore access and no response has been given, which seems pretty clear WeChat has no intention on allowing the prime minister to continue to post,” he said.

“Now that they are attempting to make a partisan intervention by blocking one side of politics getting out a message on there, it is incumbent on all politicians to get off the platform,” he said.

“A relatively small number (of politicians) are active on the platform, and I think that is appropriate given that it is a surveillance and monitoring platform of overseas Chinese.”

Albanese later told 2GB that he would welcome a discussion with the prime minister on the issue.

“I’m certainly of real concern about any national security implications by any interference by any government in the process, but I do note we haven’t heard anything from the prime minister himself about these issues,” he said.

In December 2020, the prime minister’s team had an earlier run-in with WeChat censors.

Morrison was using the channel to respond to an inflammatory post on Twitter by the Chinese foreign ministry belittling Australian soldiers.

“Our Chinese Australian community will continue to play an important role in ensuring we remain a successful, multicultural nation,” he wrote.

Hours later, WeChat deleted the post, with moderators claiming it distorted historical events and would confuse the public.

Responding to the move, Treasurer Josh Frydenberg said, “What the prime minister did in his WeChat message before it was disappointingly deleted, he made it very clear Australia is proud of its servicemen and women who wear the uniform.”