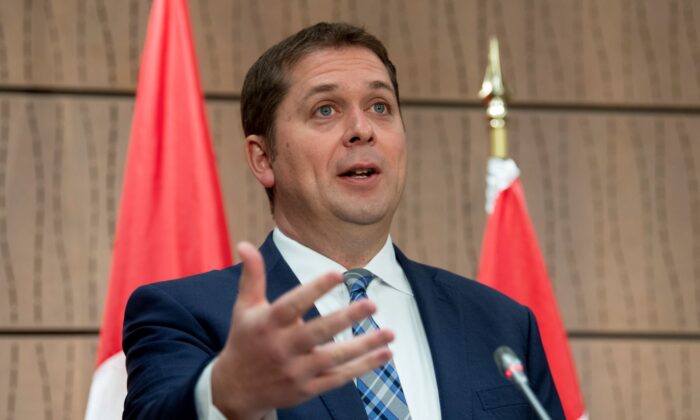 Leader of the Opposition Andrew Scheer gestures as he responds to a question during a news conference in Ottawa, on May 15, 2020. (Adrian Wyld/The Canadian Press)
Canada

OTTAWA—Conservative Leader Andrew Scheer is renewing his call for Parliament to find a new normal that looks more like the old normal.

The Opposition chief says as the country begins a slow recovery from COVID-19, it’s more essential than ever for the Liberal government to be held accountable.

“Elected members of Parliament come here to be a voice for their constituents, to hold this government to account, and that needs to resume on May 25,” he said Friday.

Parliament is adjourned until May 25, though a modified version is still meeting through a special committee focused on COVID-19.

It gathers on a video conference twice a week, and once in person, an approach that Prime Minister Justin Trudeau said Friday continues to be a good option.

Trudeau said that the set-up allows for MPs who aren’t close to Parliament Hill to have their say on the issues, as most who attend in person are from relatively nearby.

“We’ve proposed to continue that and I know there will be discussions with the other parties on the best way to move forward,” he said.

“We all agree we need to continue with a strong democracy and a functioning Parliament in a way that ensures that concerns of Canadians from every part of this country get heard.”

During this week’s in-person sitting, there were MPs representing ridings across the country in attendance.

Among them, the Green party’s Paul Manly, whose riding is in B.C, several Conservatives from the Prairies and Bloc Quebecois MPs from all parts of Quebec.

The Liberal side was mostly Toronto-area cabinet ministers, but Defence Minister Harjit Sajjan from B.C., and Treasury Board President Jean-Yves Duclos from Quebec City were there. The Liberal side also included some backbenchers whose ridings are within a few hours’ drive of Ottawa.

MPs and senators have also been recalled several times to pass emergency aid legislation, with the latest round of that expected—a bill to free up more funds to buy excess dairy products—to be approved by the Senate today.

Another committee has been studying how to transition Parliament to an entirely virtual operation, Scheer says that approach is not sufficient.

“We’ve always said that virtual sittings can be used to augment, to facilitate members who may not be able to come to Ottawa, but it certainly is no replacement,” he said.

“Mr. Trudeau should not be using a health pandemic to avoid accountability and oversight and should not be eliminating the role of the people’s representatives.”

Parliament first adjourned in mid-March as the country began to lock down to slow the spread of COVID-19.

At the time, a late-April date was chosen for it to resume, but that was punted further down the line, though not after a fight from the Conservatives who demanded that beyond just meeting to pass emergency bills they must have the chance to grill the Liberal government.

That’s what led to the special COVID-19 committee. Regular House of Commons committees are also meeting online, all studying different elements of the COVID-19 pandemic and the government’s response.

Scheer’s call for a return comes as provinces begin to loosen their restrictions and slowly allowing stores and services to re-open.

At the same time, the Liberal government continues to expand and extend billions in support to everyone from students to scientists.

Scheer said those spending decisions need to be further scrutinized as does the Liberals’ plan for what’s next.

“We all recognize we are in an unprecedented situation, but it’s incumbent upon government to have some kind of forward-looking document they are working against, including showing Canadians where all the money has gone to date,” he said.