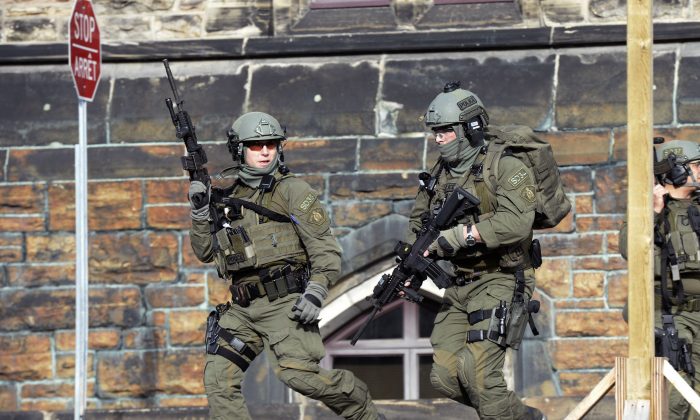 OTTAWA, Canada—A gunman with a scarf over his face shot to death a Canadian soldier standing guard at the nation’s war memorial Wednesday, then stormed Parliament in a hail of gunfire before he was killed by the usually ceremonial sergeant-at-arms, authorities and witnesses said.

The attack immediately raised the specter of terrorism, with Canada already on heightened alert because of a deadly hit-and-run earlier in the week against two Canadian soldiers by a man who police say was fired up with radical Muslim fervor.

“Today is a sad and tragic day for our city and our country,” Ottawa Mayor Jim Watson said. He said it was a tragedy with “origins as yet not fully known, causes not yet fully understood.”

Officials identified the gunman as Michael Zehaf-Bibeau, 32, but gave no immediate details on his background. Canadian police would not speculate on a motive for the shootings.

Police said in the initial hours after the shootings that as many as two other gunmen may have taken part. But as the day wore on, the cordon around Parliament was eased, employees were allowed to go home, and it appeared increasingly likely that the attack was the work of one person.

Witnesses said the soldier posted at the National War Memorial, identified as Cpl. Nathan Cirillo, was gunned down at point-blank range just before 10 a.m. by a man carrying a rifle and dressed all in black, his face half-covered.

The gunman appeared to raise his arms in triumph, then entered Parliament, a few hundred yards away, where dozens of shots soon rang out, according to witnesses.

People fled the complex by scrambling down scaffolding erected for renovations, while others took cover inside and barricaded doors with chairs as police with rifles and body armor took up positions outside and cordoned off the normally bustling streets around Parliament.

On Twitter, Canada’s justice minister and other government officials credited 58-year-old sergeant-at-arms Kevin Vickers with shooting the attacker just outside the MPs’ caucus rooms. Vickers serves a largely ceremonial role at the House of Commons, carrying a scepter and wearing rich green robes, white gloves and a tall imperial hat.

At least two other people were reported injured. They were listed in stable condition.

Around midday, Ottawa police spokesman Chuck Benoit said two or three gunmen were believed to be involved in the attacks. Gilles Michaud, assistant commissioner of the Royal Canadian Mounted Police, called it a “dynamic, unfolding situation.”

In Washington, President Barack Obama condemned the shootings as “outrageous” and said: “We have to remain vigilant.” In a telephone call with the country’s prime minister, he also offered U.S. help and reassurance to Canada, an ally in the U.S.-led air campaign against the Islamic State group.

The U.S. Embassy in Ottawa was locked down as a precaution, and security was tightened at the Tomb of the Unknown Soldier at Arlington National Cemetery just outside Washington.

Tony Zobl said he witnessed the Canadian soldier being gunned down from his fourth-floor window directly above the National War Memorial, a 70-foot, arched granite cenotaph, or tomb, with bronze sculptures commemorating World War I.

“I looked out the window and saw a shooter, a man dressed all in black with a kerchief over his nose and mouth and something over his head as well, holding a rifle and shooting an honor guard in front of the cenotaph point-blank, twice,” Zobl told the Canadian Press news agency. “The honor guard dropped to the ground, and the shooter kind of raised his arms in triumph holding the rifle.”

The Canadian Broadcasting Corp. had video of the gunman going to his car alone with his weapon after the shooting at the memorial. The car was later spotted parked in front of Parliament Hill, just down the block.

Cabinet minister Tony Clement tweeted that at least 30 shots were heard inside Parliament, where Conservative and Liberal MPs were holding their weekly caucus meetings.

“I was just taking off my jacket to go into caucus. I hear this pop, pop, pop. Possibly 10 shots, don’t really know. Thought it was dynamite or construction rather than anything else,” said John McKay, a member of Parliament.

He said security guards then came rushing down the halls, herding them toward the back of the buildings.

“And then we started talking to another woman and she was apparently inside the library of Parliament, saw the fellow, wearing a hoodie, carrying a gun,” McKay said, “and then the implications of this start to sink in.”

The attack came two days after a recent convert to Islam killed one Canadian soldier and injured another with his car before being shot to death by police. The killer had been on the radar of federal investigators, who feared he had jihadist ambitions and seized his passport when he tried to travel to Turkey.

Canada had raised its domestic terror threat level from low to medium Tuesday because of what it called “an increase in general chatter from radical Islamist organizations.”

The Islamic State group has urged supporters to carry out attacks against Western countries, including Canada, that are fighting the militants in Iraq and Syria. Eight Canadian fighter jets left for the region on Tuesday.

After the shootings, officials canceled two events in Toronto honoring Pakistani teenager and Nobel laureate Malala Yousafzai, including one in which she was supposed to receive honorary Canadian citizenship. She was shot in the head by a Taliban gunman in 2012 for supporting schooling for girls.

From The Associated Press. AP writer Benjamin Shingler also contributed to this report.