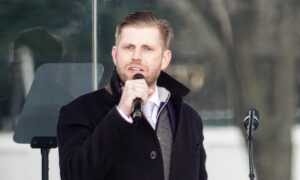 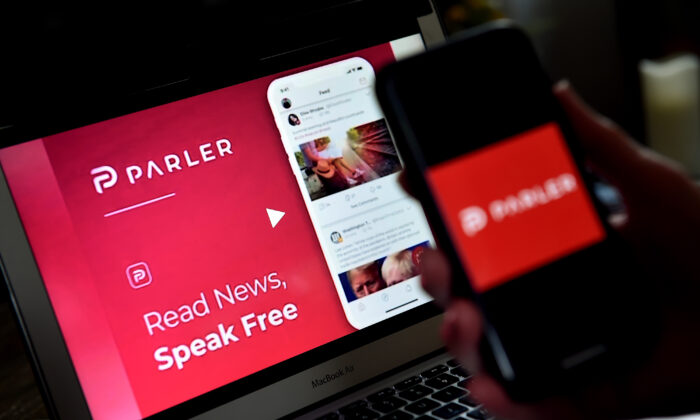 This illustration picture shows social media application logo from Parler displayed on a smartphone with its website in the background in Arlington, Va., on July 2, 2020. (Olivier Douliery/AFP via Getty Images)
Tech News

Parler filed a response to Amazon Web Services on Wednesday in its lawsuit against the Seattle-based retail giant, arguing that a representative with Amazon didn’t care about the content moderation, but was only concerned with allegedly silencing President Donald Trump.

It came after Amazon Web Services (AWS) said in court that the company displayed an “unwillingness and inability” to remove violent content after the firm suspended Parler from its web-hosting services on Monday morning.

“In completely shutting down Parler’s ability to retain its millions of users, attract advertisers, or generate any revenue, AWS has knowingly inflicted lasting damage to what was, until very recently, a thriving business,” Parler’s filing late on Wednesday read (pdf).

The document cited text messages between an AWS representative and Matze.

Amazon “expressed no concerns with Parler’s content moderation,” according to the filing, adding that the same Amazon “representative repeatedly asked whether the President had joined or would join Parler now that he was blocked by Twitter and Facebook.”

Following the breach at the U.S. Capitol building, many have faulted President Trump’s speech to protesters. Twitter, Facebook, and other Big Tech firms quickly suspended his respective accounts. It’s unclear if Trump had ever joined Parler, which has billed itself as a “free-speech” social media platform and was favored by conservatives.

“After Twitter banned President Trump on January 8, the increased new users and activity caused Parler to go down for seven hours, resulting in a backlog of 26,000 instances of content that potentially encouraged violence,” said the court filing. But, according to the company, Parler then “was able to systematically remove almost all of this content, which progress was reported to AWS, and within 48 hours by the end of Sunday—when AWS shut Parler down—Parler had removed all but some 1,000 problematic posts.”

The firm noted that it was going to add additional provisions to moderate content, but it argued that Amazon appeared not to listen.

The filing also revealed that Parler’s operators had hope that it could find another online host to recover from the AWS shutdown.

“The effects of AWS’s actions have proven much more catastrophic,” Parler’s filing said. “The notoriety and fallout from the break-up have driven away current and potential business partners, utterly frustrating Parler’s pre-termination plans to quickly replace and recover from AWS.”

The initial lawsuit sought to restore Parler’s service with AWS and claimed the Seattle-based company broke its contractual agreement.

Amazon disagreed with that claim.

“This case is not about suppressing speech or stifling viewpoints. It is not about a conspiracy to restrain trade,” Amazon Web Services said Wednesday. “Instead, this case is about Parler’s demonstrated unwillingness and inability to remove from the servers of Amazon Web Services (AWS) content that threatens the public safety, such as by inciting and planning the rape, torture, and assassination of named public officials and private citizens.”