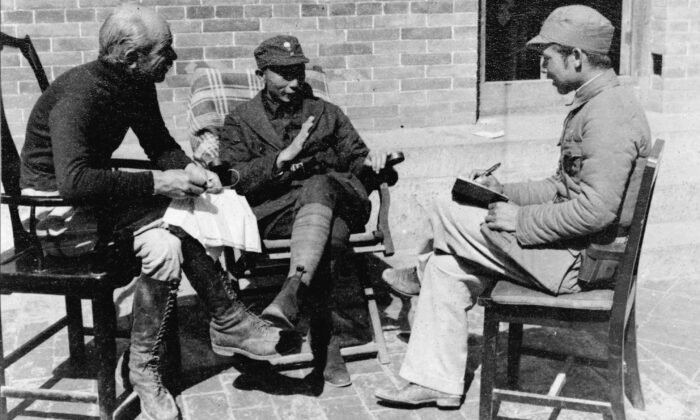 A meeting between Dr. Norman Bethune (L) and Nieh Jung-chen (C), Commander-in-Chief of the Chin-Ch'a-Chi Border Region, in China in 1938. (National Archives of Canada/CP Photo)
Canada

Specifically, the federal agency aims to offer the public “a much deeper understanding of Bethune’s life and legacy,” according to Parks Canada’s Bethune Memorial House 2020 management plan.

The thoracic surgeon’s contributions include medical innovations and his time serving as “a medical adviser to the 8th Route Army of China’s communist leader Mao Zedong in 1938–39 during the Second Sino-Japanese War,” stated a 2018 Parks Canada news release to recognize Bethune’s national historic significance.

Bethune, who is revered in China, was the first to introduce the mobile blood bank to the battlefront, where he performed blood transfusions in the midst of the fighting.

After visiting the Soviet Union in 1935, he joined the Communist Party of Canada and became involved in the Spanish Civil War as a volunteer for the Republicans between 1936 and 1937.

In 1938, Bethune joined a few other Western doctors in China. He died of blood poisoning on Nov. 12, 1939, after operating on wounded soldiers, and was buried at the North China Military Martyrs’ Cemetery in Shijiazhuang.

Upon Bethune’s death, Mao Zedong used him as a propaganda figure. In Mao’s essay “In Memory of Norman Bethune,” he said Bethune demonstrated “the spirit of internationalism, the spirit of communism, from which every Chinese Communist must learn.”

Parks Canada said it wants to reach “a broader audience, in particular, of Chinese descent.” “As the birthplace of a true Canadian hero, the site also holds immense spiritual and personal meaning to visitors of Chinese descent, from Canada and abroad, decades after the events that created Bethune’s legacy,” the 2020 management plan says.

It notes that service to the public in Mandarin will continue “to be offered when possible, to meet the needs of the high percentage of visitors for whom this is their first language.”

To prepare the site’s activities and as part of its management plan for the next 10 years, Parks Canada has held open houses and conducted online surveys, and has received input from over 60 individuals and groups from Canada, Spain, and China.

“Ultimately visitors will become ambassadors for the site, which in turn will contribute to partnering and volunteer initiatives,” the plan says.

But at least one Gravenhurst resident opposes ties with communist China. On Oct 15, 2020, the Muskoka Region published a letter from Ed Fearon calling on Mayor Paul Kelly and councillors to “immediately sever ties with its sister/twin cities in China due to the country’s communist regime’s part in the coronavirus outbreak.”

“Gravenhurst must end the sister-city relationships with Baoding and Zhangjiajie, China,” Fearon wrote.

“Gravenhurst is in relations with the totalitarian, communist regime of the People’s Republic of China. This is the exact same communist government that enjoys lying, subterfuge, and blatant coverups, by now claiming that the United States of America’s military is responsible for the spread of COVID-19, all the while illegally detaining two Canadians, Michael Kovrig and Michael Spavor, for over 600 days; since December 2018.”

“Gravenhurst mayor and council must do the right thing: Take a democratic leadership stance and denounce the corrupt Chinese communist government,” he added.