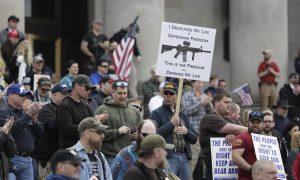 It has been more than one year since Andrew Pollack lost his daughter, Meadow, in the Parkland school shooting on February 14, 2018. In that time, he has searched for the reasons behind the tragedy, which he says was facilitated by the moral failure of the public school system.

Despite evident and staggering signs like animal torture and threatening to shoot up the school, the confessed shooter Nikolas Cruz doesn’t have a background that can alert law enforcement.

In his new book “Why Meadow Died: The People and Policies That Created The Parkland Shooter and Endanger America’s Students,” Pollack and co-author education expert Max Eden discuss how systematic inability to discipline disruptive students failed to tag Cruz.

“They had to frisk him before he entered the school,” Pollack said to the audience at the Family Research Council in Washington, D.C. on September 16.

“He threatened students’ lives. He wasn’t arrested,” he said.

“We hear he comes to school on full camo. We hear he has the words ‘I hate the N-word’ written on his backpack. We hear that he bring knives to school. We hear he carve swastikas into lunchroom tables,” said co-author Max Eden.

However, there is barely any documentary evidence of the above. “He is only officially disciplined once at his first full semester here as a full-time student,” he said.

Moreover, at Marjory Stoneman Douglas High School, “the first class they put him in was JROTC where they taught him how to shoot and gave him an air rifle,” Pollack said.

After the shooting happened, apart from the group of students advocating for background checks and other gun control measures, there is another group coming forward, saying they all knew that Cruz was going to do this.

“This is verifiable. They send Snapchats back and forth while it was happening. Is it this kid?” Eden said, “All these kids are saying that he committed these felonies in school, and he wasn’t arrested.”

Why is Cruz’s background so clean? Pollack and Eden pointed to the “leniency pressure” that has fully set into the school county district.

In January 2014, Then-President Barack Obama’s Education Secretary Arne Duncan issued “Guiding Principles: A Resource Guide for Improving School Climate and Discipline,” in order to fix what’s being called the “school-to-prison pipeline,” where black students and students with disabilities are disproportionately subjected to suspensions and expulsions.

The policy also discouraged referring students to law enforcement. The suggested alternative is “restorative justice,” where the offender and the victim sit down together with a counselor to discuss and repair the harm.

Broward County became nationally famous for embracing the policy and its success in lowering suspensions, expulsions, and arrests.

“When my daughter was at the school, one of the policies was, they were allowed four misdemeanors per school year, without ever getting introduced to the judicial system or law enforcement,” Pollack said.

However, like the guideline, the rescinding won’t require changes. Local officials will have to decide on the course to follow.

Earlier this month, California Governor Gavin Newsom signed into law that all public and charter schools could no longer suspend students in elementary and middle schools for disruptive behavior or “willful defiance.” Schools are encouraged to turn to restorative justice as an alternative.

“It can’t make sense to you to put your kid in a school where they could say whatever they want to the teacher,” Pollack said, “They can act any way they want, no consequence. Those are the same policies led to my daughter get murdered. And they are still in Broward.”

Eden said that if we need a red flag law, something has gone wrong before that. “Dangerous people should have been tagged already by either the justice system or the mental health system,” he told NTD in an interview after the event, “background checks don’t work if people don’t have background.”