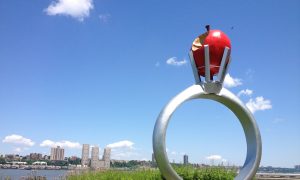 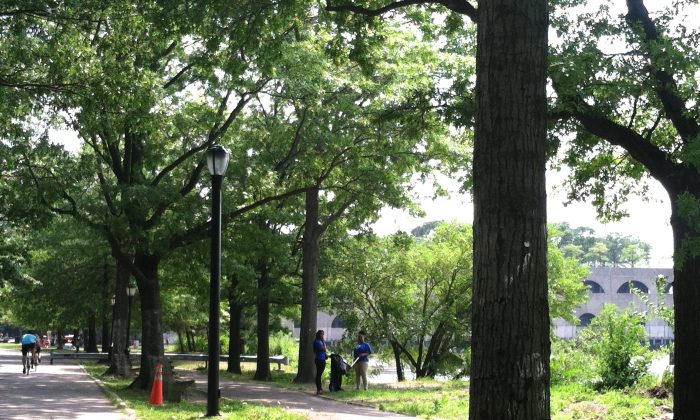 Yaheira Paredes, 28, who comes from the Bronx to visit the park with her family, said the park looked much cleaner, though she recalls the trash was not so excessive as to deter her from coming.

Local residents had also complained about park goers who brought speakers to play loud music, but Paredes said the music didn’t bother her. “It’s a park for everybody, so we don’t care that other people had music on.”

Paredes, who visits once a month, said this is her first time coming this month, so she doesn’t know how much difference the city’s extra efforts have made. But she recalls park staff would go around the park to distribute trash bags and police officers also frequently patrolled the area.

“It’s a really nice park. That’s why we like coming here,” Paredes said.

On Sunday afternoon, park patrol officers and a police car from the local 30th precinct were seen regularly surveying the park in the area near the West 148th St. and 150th St. parking lots, where most of the complaints were directed. Maintenance staff also routinely checked trash cans to dispose of filled up bags and picked up dead leaves and trash that were left behind.

Some residents thought the trash and public nuisance issue was over-exaggerated. Pena, who only wished to be identified by her last name, said the complaints could be due to a clash of cultures. Newcomers who moved uptown recently may not understand that in Hispanic culture—where many of the older residents are from—people go outdoors to relax.

“This is people’s backyards, and they need it,” Pena, 39, said. Having grown up in the Hamilton Heights neighborhood, she’s seen an influx of wealthier, white residents in recent years, who may not be used to seeing people bringing their barbeque grills and music speakers to the park to hold outdoor parties.

“They have the money to go on vacation. We don’t have money to go somewhere else, so we come to the park,” Pena said. She is worried that the complaints may lead to the parking lots getting closed, blocking some in the community from accessing the park.

But Pena agreed that the garbage was a problem that has improved in recent weeks. Before, there were very few trash cans available for people to use. But two weeks ago, Pena, who visits the park 4 to 5 times a week, noticed more trash cans and more park staff cleaning the area.

“This park is not a gem, but it’s not that bad,” she said. “The people complaining are not coming to the park.”