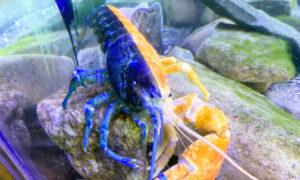 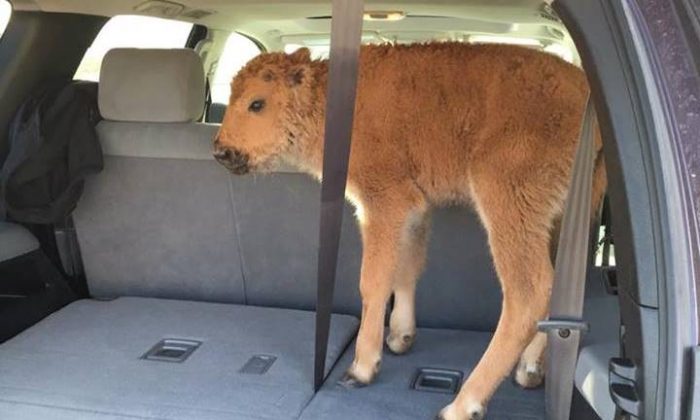 Bison calf in Yellowstone National Park that two tourists placed in their car trunk out of concern for its livelihood. (Photo was taken by Karen Richardson, who had no relation to the people who placed the animal in their car)
Animals

Yellowstone Park Service That Put Down Baby Bison: We Are Not ‘Lazy, Uncaring, or Inexpert’

A bison calf was taken from its habitat by two tourists out of concern for its life on May 9.

The tourists thought the calf was freezing and would die, so they put it in their SUV and drove it to park rangers.

The rangers took the bison and fined the tourists.

Despite repeated attempts to reintroduce the calf to the herd, the herd rejected it and the calf was euthanized “because it was abandoned and causing a dangerous situation by continually approaching people and cars along the roadway,” the National Park Service (NPS) said on May 16.

“Interference by people can cause mothers to reject their offspring.”

The news was picked up by multiple media outlets and prompted many to question why the park didn’t save the animal.

The park service posted several answers on its Facebook page, but the most detailed post appeared on May 20.

There has been a lot of misunderstanding and confusion as to why Yellowstone would euthanize a bison calf instead of caring for it or sending it to a sanctuary. We’d like to offer a more thorough explanation of the options that were available to us, and why we made the choice we did.

Federal and state regulations prohibit the transport of bison out of Yellowstone unless those bison are going to meat processing or scientific research facilities. We are working to establish quarantine facilities for bison so that they can go through the months-long testing protocols for brucellosis and, if negative, be used to start conservation herds elsewhere. However, the use of quarantine for bison hasn’t been approved, nor would a newborn calf that’s unable to care for itself be a good candidate for quarantine.

So, why wouldn’t we try to care for the calf on our own? It may be hard to imagine that Yellowstone does not provide direct care for its animals. What we do provide is a space for animals to live their lives with as little human intervention as possible in today’s world. A bison raised by humans in captivity would probably never be returned to the wild.

This is a conversation that’s difficult to have on social media. But it’s really important to understand that national parks are very different than animal sanctuaries or zoos. We made the choice we did not because we are lazy, uncaring, or inexpert in our understanding of bison biology. We made the choice we did because national parks preserve natural processes. By this we mean undomesticated wildlife and the ecosystems they both depend on and contribute to. Every day in national parks, some animals die so that others may live. In fact, as many as 25% of the bison calves born this spring will die, but those deaths will benefit other animals by feeding everything from bears and wolves to birds and insects. Allowing this cycle of life to play out aligns most closely with the stewardship responsibility entrusted to us by the American people. Unfortunately, the calf’s behavior on roads and around people was hazardous, so rangers had to intervene: but the calf’s body was left on the landscape.

We provide this explanation not because we want everyone to agree with us, but because we believe that problem solving starts with difficult conversations. More will come. When they do, it’s important that you continue to speak freely, and with the assumption that everyone, including the people who thought they were helping the bison calf by putting it in their car, is operating with the best intentions.

Situations like this one are challenging, but they also offer a space for all of us to engage in deeper conversations about the meaning of wild places as we move forward into the second century of the National Park Service.

In all of this, there’s one takeaway we really want to underscore: please give animals space. Stay at least 100 yards away from wolves and bears, and at least 25 yards away from all other animals. Help us make it socially unacceptable to do anything else.