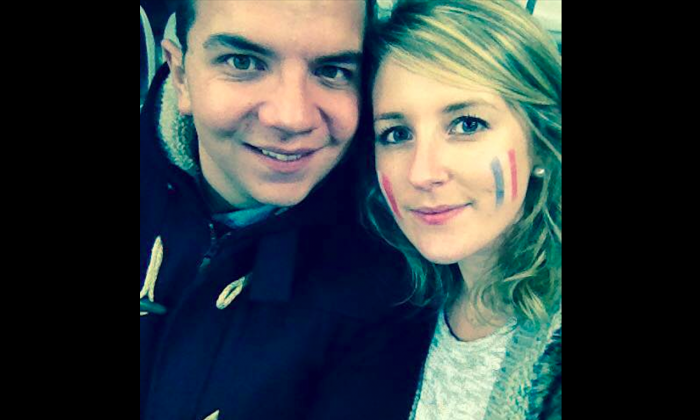 Coralie Dantan and her boyfriend Mikael Auzou at a soccer match at Stade de France on Nov. 13, before three terrorists detonated bombs outside the stadium. (Courtesy of Coralie Dantan)
Europe

Fifteen minutes into the soccer match at Stade de France, there was a blast. Five minutes later, another. Coralie Dantan, 25, looked over at her boyfriend. He told her it was nothing. Firecrackers were common at European soccer games. But these were strange firecrackers, she remembered thinking, how could they blast in the stadium without smoke?

It was Dantan’s first time at Stade de France. She pushed the thought away and tried to enjoy the game.

Little did the fans know, at least one suicide bomber had tickets to the game but failed to pass security.

During halftime, one of her friends went to the restroom. He returned with a wan face.

On his way out, he met a fan who told him that three bombs had detonated outside the stadium, and shootings were beginning to happen throughout Paris.

Dantan realized that the mysterious blasts she heard earlier were bombs. Word was spreading. Many fans stopped paying attention to the game.

A large portion of the 80,000 people in the stadium began texting and checking their phones for news. Cellphone signals wavered. Dantan saw a helicopter fly over the stadium.

The game carried on.

French soccer federation head Noel le Graet later said that the attacks weren’t announced to the fans or the players to avoid mass panic. Since the bombs had gone outside of the stadium, it was safer for fans to remain inside.

After 90 minutes, the referee blew the whistle and ended the game.

Dantan was afraid to leave but also afraid to stay. “There were 80,000 people around us. It was possible one of them was a terrorist.”

Two entrances were closed off after the explosions. The crowd slowly filtered through the remaining exits.

Suddenly, a mass of people in front of her began screaming and running back toward the stadium.

She held hands with her boyfriend and her friend as they ran back toward the stadium.

She tightened her grip as she felt her friend’s hand slipping from hers. But the force of the crowd separated them. She feared her friend was getting trampled but was powerless to help.

Even though her friend turned out to be all right, the feeling of losing her was something that would haunt Dantan in the nights to come.

They returned to the center of the stadium and waited for updates. “I couldn’t stop looking around,” she said. “Anyone could come into the stadium then. A terrorist could enter.”

After what felt like an eternity, they were able to return home. They never found out what caused the mass panic that pushed the crowd to return to the stadium.

Once they got on the highway and exited Paris, Dantan sighed. “A lucky star was watching us,” she said.

On the evening of Nov. 13, coordinated terrorist attacks occurred at six separate locations in Paris. At least 129 people died, and at least 352 people were wounded, 99 seriously.

In the same hour that Dantan had heard the bombs go off outside the stadium, the owner of La Petite Chaufferie Bar cried out for people on the street to come inside his bar.

Then, he slammed the bar’s steel overhead door shut. The boisterous bar quieted down into a tense silence.

Thomas Luce, who was in the bar celebrating a friend’s birthday, didn’t know why they were locked in.

A trendy bar full of people on a Friday night was eerily quiet, as people searched for news on their smartphones.

“We had a really hard time getting information,” Luce said in French. “Little by little, we learned what was happening.”

Luce read on his phone that there had been a terrorist attack at Stade de France. He did not immediately connect it with what was happening to him.

He read there were shootings happening across Paris. Then, he read the location of the shootings.

La Petite Chaufferie Bar was less than a mile away from a restaurant where 19 people were killed, and 1 mile away from the hostage situation at Bataclan Concert Hall that killed 89.

The air was heavy with tension in the bar. Many people began calling their friends and family to let them know they were safe.

“There was this stupor,” he said. “We were all shocked. We tried to comfort each other.”

“We were all very sad when we went back home and watched the news on TV,” he said. “We were lucky to be there. Everyone thinks it could have been us.”

Alexandra Wu contributed to this report.