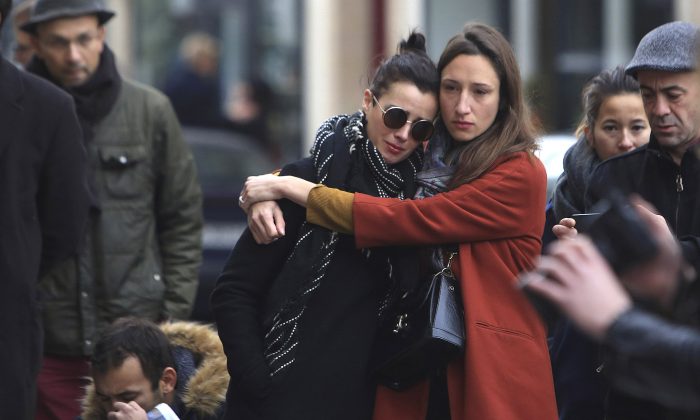 Women comfort each other as they stand in front of the Carillon cafe, in Paris, Saturday, Nov.14, 2015. French President Francois Hollande vowed to attack Islamic State without mercy as the jihadist group admitted responsibility Saturday for orchestrating the deadliest attacks inflicted on France since World War II. (AP Photo/Thibault Camus)
Europe

Several shootings around Paris killed dozens of people, hostages were taken at a theater, and three explosions were reported near the Germany-France soccer match on Friday night in what officials are saying are terrorist attacks. According to multiple reports, there were at least six shootings and three explosions across the capital.

UPDATE at 3:58 p.m. – Police in Paris have congregated at the site of the Pullman Hotel, according to witnesses. Meanwhile, police have evacuated the Eiffel Tower site nearby, according to Reuters.

UPDATE at 3:45 p.m. – Police in Belgium have arrested several suspects due to the Paris attacks. They were arrested in Brussels, the capital of the country, AFP reported.  Prime Minister Charles Michel said the suspects were linked to “suspect vehicles” identified during the attacks.

“A case has immediately been opened linked to suspect vehicles in Paris, to check people linked to those vehicles. There have been several arrests,” Michel told RTL TV.

UPDATE at 3:33 p.m. – The White House said in a statement that no information contradicted the French assessment that ISIS carried out Paris attacks, reported AP.

UPDATE at 3:30 p.m. – Two more victims were identified in the attacks. A 26-year-old lawyer died, and a music journalist died as well.

UPDATE at 2:59 p.m. – The Guardian reported that ISIS confirmed they sent eight militants to carry out the attacks in Paris.

UPDATE at 2:58 p.m. – It was confirmed that California college student Nohemi Gonzalez, 23, was among the dead. She died at a shooting in a restaurant.

UPDATE at 2:44 p.m. – There are fears that a UK man, Nick Alexander, may have died in the attack. He was at the Bataclan theater and was shot.

UPDATE at 2:21 p.m. – The French PM has said that airstrikes will continue against ISIS targets in Syria, and he said that France will remain in the coalition against the terrorist group. The BBC also reported that a Syrian passport was found next to the body of a bomber.

UPDATE at 1:01 p.m. – French President Francois Hollande said ISIS declared an “act of war” in the terrorist attacks. France, he said, “will be merciless to the Islamic State group.”

UPDATE at 10:30 a.m. – The Islamic State (ISIS) has claimed responsibility for the attacks.

UPDATE at 10:30 p.m. – Officials have that said at least eight “militants” were involved in the attacks, said AFP. Meanwhile, the Paris prosecutor’s office said 200 people were injured, 80 of them critically.

UPDATE at 9:50 p.m. – Paris police said that all attackers are believed to be dead, according to  AP.

UPDATE at 9:30 p.m. – French media says three of the attackers a the Bataclan theater blew themselves up with explosives.

UPDATE at 8:50 p.m. – French president said the borders would be closed, but his office now says that was not correct.

UPDATE at 8:40 p.m. – Five attackers were “neutralized,” the French prosecutor’s office said. Two of the assailants were at the Bataclan theater.

UPDATE at 8:20 p.m – More than 149 people have been confirmed dead, according a French official who spoke with CNN. More than 1,500 soldiers were sent to Paris. Meanwhile, a France24 reporter says 158 died.

UPDATE at 8:15 p.m. – There were more than seven coordinated attacks on Paris, CNN reported.

UPDATE at 8:05 p.m. – Paris’ deputy mayor said 118 people were killed across Paris in the attacks. Meanwhile French President Hollande said France will fight the attackers “without mercy,” according to AFP.

UPDATE at 7:45 p.m. – One police official said 11 people were killed at a Paris restaurant in the 10th arrondissement near the stadium, along with more than 100 at the concert hall.  Other officials said three people died as bombs went off outside a stadium.

UPDATE as of 7:20 p.m. – At least 100 people were killed at the Bataclan theater during a hostage situation, reported AFP. Police stormed the building and killed two gunmen.

Several explosions were heard during the France-Germany soccer match at the Stade de France north of Paris on Friday, Nov. 13. One of explosions near the Paris stadium was suicide attack, according to AFP, citing “several sources.” A French police official confirmed to The Associated Press two suicide attacks in total were carried out near the stadium.

Meanwhile, there is a hostage situation nearby at the Bataclan theater. People from inside the theater were tweeting and a video was uploaded, showing the chaos.

As of 7 p.m. ET, the hostage situation at the theater ended after French police stormed the building. Two gunmen were killed, reported BFMTV. Police have taken out at least 100 hostages, and some appear to be wounded.

President Barack Obama said the attacks in Paris are an “outrageous attempt to terrorize innocent civilians.”

President Hollande said in a televised statement: “We have mobilized all available forces to neutralize the terrorists.” The military was deployed, the borders of France were closed down, and a state of emergency was declared. He said security forces are assaulting a site in Paris after the attacks.

City authorities in Paris called on residents to stay home after the deadly attacks, AFP reported.

Gregory Goupil of the French Police Union Alliance said two of the explosions that occurred near Stade de France were suicide attacks, The Telegraph reported.