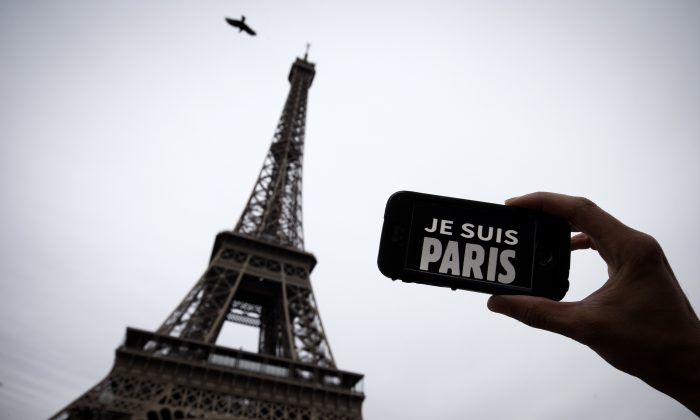 In this illustration picture taken in Paris on November 14, 2015 a person holds aloft a smartphone bearing the message "Je Suis Paris" in front of the Eiffel Tour, following a series of attacks on the city in which at least 128 people were killed. Islamic State jihadists on Saturday claimed a series of coordinated attacks by gunmen and suicide bombers in Paris that killed at least 128 people in scenes of carnage at a concert hall, restaurants and the national stadium. AFP PHOTO / JOEL SAGET (Photo credit should read JOEL SAGET/AFP/Getty Images)
US

Apparently, some University of Missouri protesters and Black Lives Matter supporters were tweeting that the terrorist attacks in Paris have diverted attention away from the recent university campus protests. One rapper even released a song, titled “[Expletive] Paris” in response.

According to conservative news website Breitbart.com, campus activists said their “struggles” were being “erased” due to the terrorist attacks that left more than 130 people dead on Friday night. “Racist white people kill me, you want everyone to have sympathy for YOUR tragedy, but you have none of ours,” one person wrote. Another wrote of the Paris coverage, “we deserve it too. #Mizzou.”

“Not taking away from Paris we love yall but we have terrorist in USA Called KKK #Mizzou gov got work to do,” another wrote. “I do pray for Paris, but people need to start seeing what is going on in our own country. I BARELY saw anything about #Mizzou. Quite sad,” wrote another.

Many attempted to draw attention to France’s involvement in the slave trade more than 100 years ago.

A hip-hop artist, going by the name “Na-Ledge,” who also supports the Black Lives Matter movement, released a song called “F— Paris” on YouTube on Sunday. “I say this Because of the MAJOR participation of the SLAVE TRADE FRANCE was involved in. Hate to see the lose of life, yet my ANCESTORS souls are still crying over there PAIN.. And I am to.. France turned 4 times as many slaves as the Americas and used further brutality if that is even fathomable,” he said in attempting to explain his reasoning.

However, a number of people lashed out at the activists, saying their tweets and comments were insensitive in light of the terrorist attacks.

It’s absolutely disgusting what those #BlackLivesMatter bigots are tweeting about the situation in Paris.

All these folks arguing “Why r u praying for Paris!” #STFU #PrayforParis #PrayForTheEntireWorld #BlackLivesMatter pic.twitter.com/eZlhgRp9xh