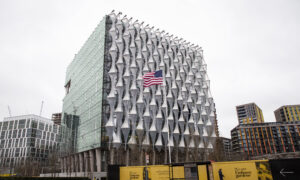 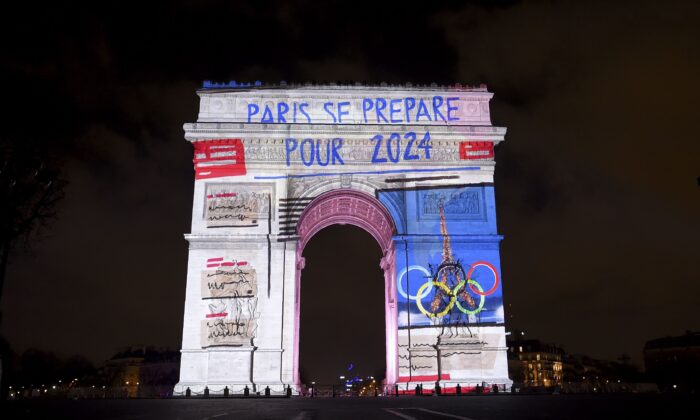 Images with a slogan reading "Paris is getting ready for 2024," referring to the 2024 Olympic Games that Paris was awarded, are projected on the Arc de Triomphe monument during a laser and 3D video mapping show as part of the New Year celebrations in Paris on Dec. 31, 2017. (Guillaume Souvant/AFP via Getty Images)
Viewpoints

Paris Sold a Bill of Goods With 2024 Olympics

The only major country consistently to emerge with credit from the Olympic Games is India.

It wins very few medals, certainly in proportion to its population, doing hardly better in absolute terms than San Marino. The Indian government evidently does nothing to support or encourage its athletes: bravo, I say, long may it continue to do nothing!

We will know that India has lost its soul once it begins to win Olympic medals; but for the moment it is a beacon to the world, a haven of sanity in a sea of sporting madness.

The 2024 Olympic Games will be in Paris, assuming that they are not postponed a year because of the delay to the 2020 Tokyo Games—and viruses always permitting, of course.

What is strange is that the Games, so-called (for they are not really games at all), induce a totalitarian state of mind in those who promote and praise them. They start to speak in “langue de bois,” wooden language, and sound like Leonid Brezhnev proposing a toast to some Third World dictator at a banquet marking a state visit to Moscow.

This is what emerges from a French book, “2024: Les jeux olympiques n’ont pas eu lieu” (“The Olympic Games Have Not Taken Place”) by Marc Perelman.

Perelman is a writer whom I respect. Trained as an architect, he wrote a book severely criticising Le Corbusier, that fascisto-totalitarian Swiss-French architect, apostle of reinforced concrete, who did so much to make the world considerably uglier than it was already.

For a French architect to write against Le Corbusier in France, however, is a little like an essayist writing against Mohammed in Mecca, and it took a considerable degree of courage for Perelman to do so; he had to be prepared to take the consequences for his career.

The fact that his criticisms of this monster of architectural self-promotion and intellectual intimidation should not have needed enunciation is beside the point. It was Perelman who defied the reigning professional omertà in France.

The praise-singers, promoters, preachers, and propagandists of the Olympic Games, according to M. Perelman, not only claim for them all kinds of virtue and beneficial effects that they have never had, never will have, and will certainly not have in Paris, but ignore their nastiness and extremely bad effects.

The Olympic mission statement, so to speak, “citius, altius, forties” (Faster, higher, stronger), is both fatuous and nasty, an incitement for young people—originally the Olympic “ideal” was for men only—to waste their lives and their long-term well-being, for the sake of a trivial and worthless goal.

Consider, for example, throwing the javelin. To become anything like the best in the world at it, you would have to devote untold numbers of hours, your life in fact, to training.

And for what, exactly? Who on earth really cares how far anyone can throw the javelin? Could any more trivial pursuit well be imagined? And if you end up seventh or eleventh best javelin thrower in the world, you will certainly be very good at it—perhaps being only a foot or two behind the world champion—but to have reached this height, or perhaps I should say length, of fatuity you would have wasted your youth.

The games have always proved useful to the worst and most dictatorial of regimes. These regimes devote resources to ensure that their citizens win as many medals as possible, not hesitating to deform or ruin their lives in the process, and then use the tally of medals to argue the superiority of their political rule.

I am old enough to remember the Press sisters, Irina and Tamara, Olympic female champions from the Soviet Union who mysteriously disappeared from the athletic scene once sex-tests became compulsory. It is not known to this day whether the Press sisters were men, women, or neither.

They were, however, truly emblematic of the Olympic ideal: cheat, win at any cost, dope or be doped, and always serve ulterior and invariably discreditable interests.

The Olympic Games have been foisted on the French people (as they were foisted on all previous populations) without their consent. They have been sold to them using spurious arguments, or rather slogans masquerading as arguments.

In the name of building “green” facilities, millions and millions of tons of concrete will be poured, costing untold quantities of energy. New and beautiful new quarters of the city will be erected, so it is said, though everyone knows that no French architect has been able to construct anything of any aesthetic worth since the end of the Second World War.

One has only to glance at the “iconic” modern buildings of Paris to realize that this is so. Not only are French architects capable of expending millions, even billions, to raise monstrosities, it is all that they are capable of doing.

But it is in the lies told about the social effects of the Games that are most revolting. Some of the events, and much of the building, will take place in Saint Denis, the poorest and most overcrowded part of the city.

Taking the London Olympics as an example, where precisely the same lies were told, it is clear that the local population, relatively impoverished and unqualified, will benefit not at all, and may even be pushed out by development.

The most they can hope for is ephemeral unskilled jobs, but even that is not sure, for the organisers of the Olympics claim for themselves the supranational right to import whatever labour they choose, without the French state having any say in the matter.

As for the propaganda, it could come straight from totalitarian dictatorship. Before Paris “won” the Olympic Games at the International Committee’s meeting in Lima, the local council put up notices all over Saint Denis, “We are ready in Saint Denis to mobilize all the inhabitants but also to draw attention to our many advantages in order to win [the games for] Paris 2024 on 13 September in Lima!”

As for the inhabitants to be mobilized, their opinion was specifically not sought. They were nothing but enthusiasm-fodder, of the kind that the Chinese or North Korean crowds compulsorily “welcoming” Nyerere or Ceausescu, of whom they had probably never previously heard, on their visits to China or North Korea had to display.

Naturally, events like the Olympic Games are also a gift to the tinsel-brained political class of western democracies. There remains, of course, the even more disturbing question: why does anyone interest himself in the Olympic Games? Mr. Perelman tells us that they are, in effect, the meaning of a life that is in desperate search of a meaning.