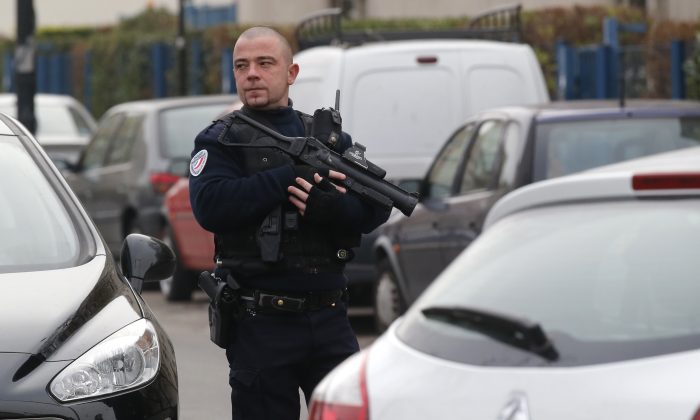 A police officer patrols near a pre-school, after a masked assailant with a box-cutter and scissors who mentioned the Islamic State group attacked a teacher, Monday, Dec.14, 2015 in Paris suburb Aubervilliers. (AP Photo/Michel Euler)
Europe

A hooded man shouting his allegiance to the terror group ISIS stabbed a nursery school teacher in the throat in his Paris classroom on December 14.

UPDATE: Police are now saying the story was made up, reported BBC.

The brutal attack took place a month and a day after the Paris terror attacks by the Islamic State, also known as ISIS, ISIL, and Daesh.

Police are treating the incident as a terrorist attack, and said that the male teacher was stabbed in the throat and stomach with scissors and a box-cutter.

Sources told Le Parisien that the hooded man, wearing gloves, a mask, and military type shoes, shouted “It is for Daesh” while stabbing the teacher.

“It is a warning, this is only the beginning” the assailant also shouted.

Police have launched a manhunt for the attacker after he fled the scene. The teacher was rushed to the hospital and is expected to recover.

The Paris Prosecutor’s office opened an investigation Monday morning and is treating the matter as a terrorist case, a spokeswoman told the Wall Street Journal.

Education Minister Najat Vallaud-Belkacem added that the government would continue to reinforce security measures at schools. She called the attack “a very grave act in a school… that should be a sanctuary.”

French schools have been on alert since the Islamic State said in its French propaganda magazine in the Nov. 30 issue that it would target the education system. The terrorists wrote: “It is the obligation to fight and to kill… these enemies of Allah.”

Isabelle Guigon, secretary-general of the teacher’s union SE-UNSA in the Seine-Saint-Denis department, where Aubervilliers is located, said that teachers are well aware of what ISIS threatened.

“We’ve had many calls from colleagues who told us that teachers in their schools were worried. It is obvious there is a real fear inside the schools,” she said.

“We’re wondering now if we should take some exceptional measures, at least until Christmas.”