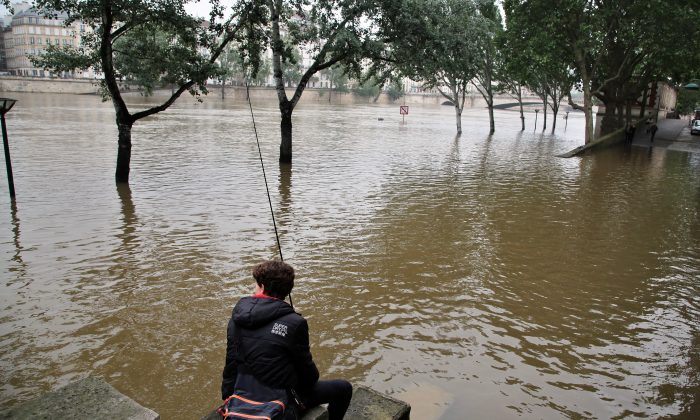 A boy fishes in the Seine river during floods in Paris on June 5, 2016. The riverside Grand Palais exhibition hall in Paris reopened Sunday as floodwaters slowly receded from the French capital, though risks remain for other regions. (AP Photo/Thibault Camus)
Europe

PARIS—The riverside Grand Palais exhibition hall in Paris reopened Sunday as floodwaters slowly receded from the French capital, after the worst floods in three decades caused the Seine River to burst its banks.

Other regions remained at risk, notably parts of Normandy, as digging out began in villages and towns around the French capital.

The Louvre Museum, several Paris train stations and roads remained closed. Quayside restaurants along the Seine were still engulfed in water Sunday and tourist boats were unable to pass under bridges, a blow to the riverside economy.

The glass-topped Grand Palais, built for the 1900 World’s Fair and currently hosting an exhibit by avant-garde Chinese artist Huang Yong Ping among several others, opened again Sunday after closing Friday because of flood risks.

Elsewhere, emergency crews were pumping water out of a key Paris highway interchange. South of the capital, 300 cars and big rigs trapped for four days on a highway were being removed and returned to their owners who had been forced to abandon them. The complex, day-long operation “is going quite well,” Gendarmerie Captain Laurent Terrien told BFM-TV.

After a week of exceptionally heavy rains around Europe, at least 18 people died in flooding in Germany, France, Romania and Belgium. New thunderstorms were forecast for eastern France on Sunday. In Normandy, the Seine River was expected to peak later in the day. More than 11,000 French homes are still without electricity.

In Paris, the Seine peaked Saturday and the national flood service said it would remain about 4 meters (more than 13 feet) above normal Sunday. Authorities warn it will take up to 10 days for the river to return to normal.

The flood risks along the Seine moved downstream after forcing thousands from their homes and houseboats earlier this week. West of Paris, it overflowed around the medieval city of Rouen overnight, but the local administration said Sunday the damage was “localized and limited” and severe flood warnings for the area were lifted.

Townsfolk were digging out southeast of Paris in the hard-hit Seine-et-Marne region around Nemours, where the Loing River overflowed. Small animals at a local zoo were among the victims. BFM-TV showed what looked like the lifeless body of a baby lamb hanging in tree branches.

German authorities on Sunday pulled the plug on the Rock am Ring music festival west of Frankfurt after a new storm warning was issued. Late Friday, a lightning storm sent 70 people from the festival to the hospital.