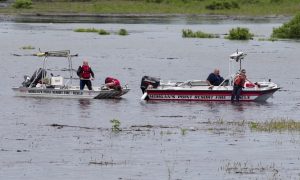 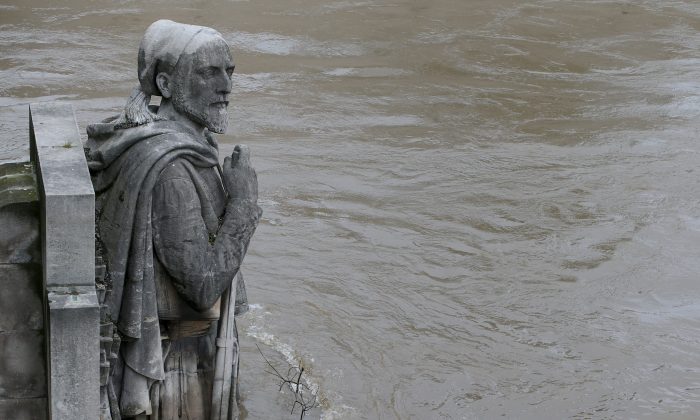 A photo taken on June 3, 2016 shows waters of the river Seine rising on the statue of the Zouave at the Alma bridge in Paris. The rain-swollen river Seine in Paris reached its highest level in three decades, spilling its banks and prompting the Louvre museum to shut its doors and evacuate artworks in its basement. Parisians were urged to avoid the banks of the river which was expected to reach a peak of six metres (19 feet), while deadly floods continued to wreak havoc elsewhere in France and Germany. / AFP / JOEL SAGET (Photo credit should read JOEL SAGET/AFP/Getty Images)
Europe

Waters from the Seine River in Paris continued to spill over the city’s streets, closing down landmarks on June 3.

Parks, museums, and cemeteries were being shut down as the city braced for the rising waters that could take weeks to fully clear.

The Louvre museum, home to Leonardo Da Vinci’s “Mona Lisa,” was shut down. The Orsay museum, and the Grand Palais, which draws 2.5 million visitors a year, were also closed.

Today due to the level of the river #Seine, the Louvre is closed to ensure the protection of the works.
#CrueParis pic.twitter.com/33faZtpRbU

“We evaluate the situation for all the [cultural] buildings nearly hour-by-hour,” Culture Minister Audrey Azoulay told reporters outside the Louvre.

“We don’t know yet the evolution of the level of the Seine River in Paris,” she added.

Curators at the Louvre were moving about 250,000 artworks from storage areas at risk of flooding and taking them to safety upstairs. The Orsay museum also prepared for possible flooding and said it would be closed until next week.

Officials say the river has reached its highest level in almost 35 years, and was expected to peak later in the day.

“We have been taken by surprise,” said Matthieu Clouzeau, the city’s director of prevention and protection, according to Le Parisien.

“The rise in water levels has been twice as fast as our planning models anticipated, based on statistics from 1910. Then the river rose by 50 centimeters a day. Between Tuesday midnight and Thursday midnight, the Seine rose by two meters,” he added.

Basements and apartments in Paris’s 16th District began to flood on the afternoon of June 3 as waters continued to rise.

The flooding, which spanned across Europe, was caused by almost a week of heavy rain. Although the rain had died down in some areas, the waters are still rising. Fifteen people died across Europe and there are others unaccounted for.


German officials said the body of a 65-year-old man was found overnight, bringing the death toll in the country to 10. The French Interior Ministry said a 74-year-old man fell off his horse and drowned in a river. His death was the second in France.

Two people died and 200 others were evacuated from their homes in Eastern Romania after floods took over the area. A beekeeper in Belgium also died after he was taken by rising waters while trying to protect his hives.

The flooding has also impacted traffic as various railway stations in Paris were shut down.

More than 20,000 people were without power east and south of the city, according to French energy company Enedis.