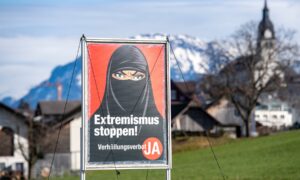 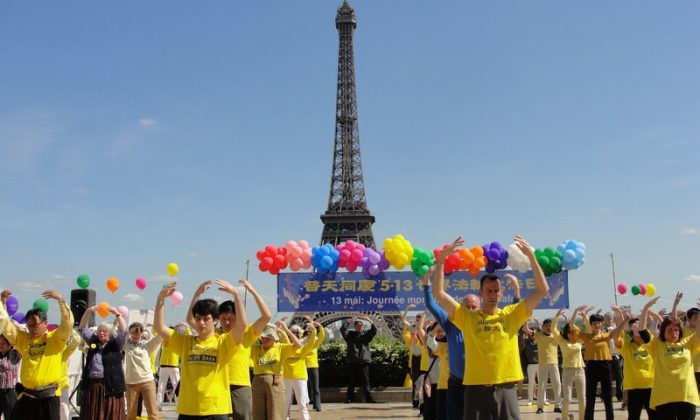 Practitioners from all ages demonstrate the exercises of Falun Dafa in front of the Eiffel Tower in Paris during World Falun Dafa Day on May 13, 2015. (Epoch Times)
Europe

Paris: Falun Dafa Day 2015 in the Square of Freedom and Human rights

PARIS, FRANCE—Over a hundred practitioners of the Falun Dafa discipline gathered on the Trocadéro esplanade in front of the Eiffel Tower in Paris on May 10 to celebrate the 23rd anniversary of the public introduction of Falun Dafa.

Falun Dafa (also called Falun Gong) is a mind and body cultivation practice consisting of five gentle exercises. It also encourages its practitioners to follow the principles of truthfulness, compassion, and tolerance. It was first introduced to the public by Mr. Li Hongzhi on May 13, 1992, in China. Since then practitioners celebrate May 13 as World Falun Dafa Day.

Falun Dafa spread fast in China during the 1990s. By 1999 official government statistics put the number of practitioners at 70 million to 100 million, even exceeding the membership of the ruling Communist Party. That was when Party leader Jiang Zemin ordered the practice to be “eradicated.”

Overnight, tens of millions of Chinese became acutely aware of their country’s lack of human rights and freedoms. Millions were imprisoned and thousands were confirmed to have been persecuted to death simply for continuing to practice, asking the government for their right to practice, and later for distributing information about the persecution, according to Falun Dafa official website Minghui.org. Some independent investigators, like former Canadian Secretary of State David Kilgour, estimate the number of deaths due to the persecution has been at least in tens of thousands.

A months ago Canadian documentary “Human Harvest,” featuring Kilgour, won the prestigious Peabody Award for its unvarnished exploration of the persecution of Falun Dafa, specifically the communist regime’s killing of imprisoned Falun Dafa practitioners to sell their organs.

The transplant industry boom in China coincided with the launch of repressions against Falun Dafa and since then investigators have gathered hundreds of interviews with formerly imprisoned Falun Dafa practitioners, former and current hospital staff, and occasional hints from Chinese officials corroborating that Falun Dafa practitioners have been singled out as victims of state-sponsored organ trade on a massive scale. Author Ethan Gutman estimated in his book “The Slaughter,” that some 65,000 Falun Dafa practitioners fell victim to organ harvesting between 2000 and 2008.