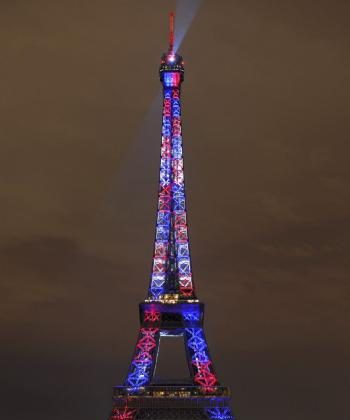 Using more than 400 LED high tech projectors, at the top of every hour starting at 8 p.m. the Eiffel Tower is illuminated to offer a “magical” quadri-chromatic 12-minute show, one minute for each decade the tower has been in existence.

This new display is in addition to the tower’s usual white sparkling lights. The display began on Oct. 22 and will repeat every night until Dec. 31.

According to organizers, the light sequence evokes “the extraordinary construction site of the tower,” by lighting the tower from its base to its top to symbolize the steps of its construction.

“Next a shower of light, revolving from level to level, faceted, stroboscopic, rhythmic, color blending … a splendid tribute to the Eiffel Tower and its majestic structure.”

The Eiffel Tower was built in two years, two months, and five days, to be ready for the opening of the 1889 Universal Exposition and to celebrate the 100th anniversary of the French Revolution. Back when the tower was inaugurated on March 31, 1889, 10,000 gas lights illuminated it.

The tower is one of the most recognized buildings on Earth and the most-visited paid monument in the world. It has become a symbol of Paris, despite initially being deemed a “horror” that tarnished Paris's architectural excellence.