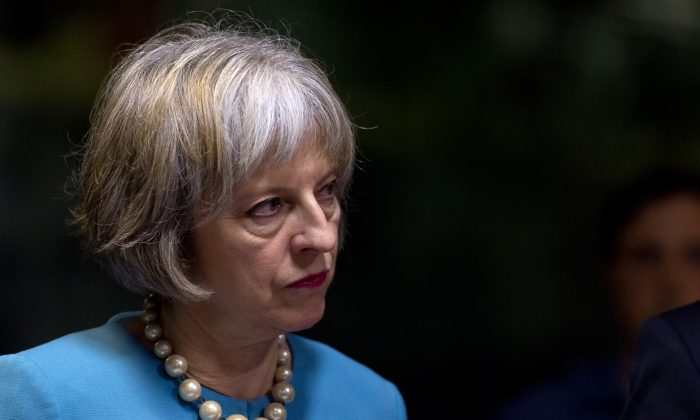 British Home Secretary Theresa May receives a tour of HMS Bulwark during the Valletta Summit on migration on November 11, 2015 in Valletta, Malta. ( Ben Pruchnie/Getty Images)
Tech

British politicians have called for expediting the passage of a surveillance bill in the wake of the Paris terrorist attacks, which they argue is necessary to prevent similar attacks in Britain.

Earlier this month, Home Secretary Theresa May unveiled a draft of the Investigatory Powers Bill, which would greatly expand the power of British security agencies to monitor civilian Internet records and force private companies to crack encrypted data for the police.

One of the bill’s more controversial clauses would require Internet service providers to keep their customers’ browser histories for 12 months.

British Prime Minister David Cameron said on BBC’s Radio 4 “Today” that “we should look at the timetable” of the draft bill. Lord Carlile, former independent reviewer of anti-terror legislation, wrote a piece in the Daily Mail saying that the security agencies needed new powers so that they can “disrupt atrocities such as the slaughter that took place in Paris.”

Proponents of the bill are pointing to the Paris attacks to strengthen their position and have implied that former NSA contractor Edward Snowden unwittingly aided terrorists in their operations by using his large social media following to rally against the bill.

“I am afraid that I have less and less sympathy with those who oppose the new surveillance powers that the government would like to give the security services.” London Mayor Boris Johnson wrote in The Telegraph.

“To some people the whistleblower Edward Snowden is a hero; not to me. It is pretty clear that his bean-spilling has taught some of the nastiest people on the planet how to avoid being caught. … I want these people properly spied on, properly watched—and I bet you do, too,” wrote Johnson.

Still, demands for an explanation behind the attacks have stoked the rumor mills, and a mistaken Forbes report that alleged the terrorists planned their attacks using the video game “Super Mario Maker” on PlayStation 4 was widely reproduced in the U.S. media.

The author of the report, Paul Tass, told Kotaku.com that he had misread a statement by Belgian federal home affairs minister Jan Jambon that was issued three days before that Paris attacks, who said that “PlayStation 4 is even more difficult to keep track of than WhatsApp.”