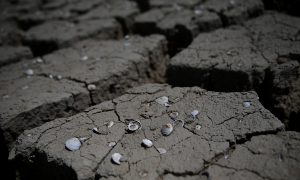 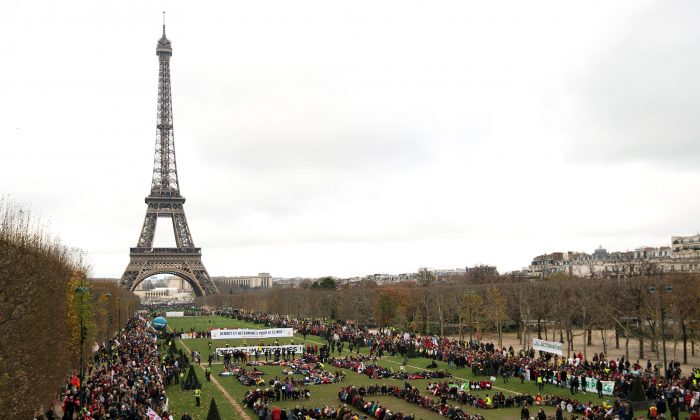 Several Non Governmental Organisations (NGO) gather to form a human chain reading "+3°C SOS" on the Champs de Mars near the Eiffel Tower on December 12, 2015 in Paris on the sidelines of the COP21, the UN conference on global warming. (ALAIN JOCARD/AFP/Getty Images)
Environment

At 7:27 p.m. local time Saturday, Dec. 12, 2015, a new Paris Agreement on global climate change was born after four years of taxing labor. Its much-anticipated birth was quickly followed by copious self-congratulations by many of the parents in the room who almost all were overcome by joy and bursting with pride.

Praise heaped upon newborns should be taken with a grain of salt. “Historic” is a term often thrown about too cavalierly, and a “new era” does not start every time government bureaucrats pull a few all-nighters. But, what has come out of Paris clearly marks a new direction for global climate cooperation.

We wish the newborn well, but upon some postnatal reflection, it is clear that the birth of the Paris Agreement should be cause for both hope and caution. Certain political developments are principally good and welcome. Other changes are largely bad. And some purposeful omissions may be plain ugly.

The Paris Agreement signals that climate change is back at the center of the global political agenda—at least for now.

A collective weight has been lifted off the backs of the many delegates who for the past six years have been struggling to recover from the Copenhagen fiasco in 2009, where countries failed to agree on a common strategy. The lingering gloom of Copenhagen has been replaced by Paris euphoria. For this, the French hosts deserve much credit.

The two weeks that preceded the birth of the Paris Agreement helped to breathe new and much-needed life into the multilateral process of formulating a global approach to climate change mitigation and adaptation. Unprecedented participation by world leaders, including President Obama, Chinese president Xi Jinping, and other heads of state, at the beginning of the summit helped set the tone that then allowed national delegates to make the necessary compromises.

The Paris Agreement signifies a very welcome return to multilateralism. Much of the Paris conference was also refreshingly transparent; the attempt to be inclusive was honest.

As a result, a new collective ambition—of “holding the increase in the global average temperature to well below 2 degrees Celsius (C) (35.6 degrees Fahrenheit (F)) above preindustrial levels and to pursue efforts to limit the temperature increase to 1.5 degrees C (34.7 degrees F) above preindustrial levels” (Article 2) has made its way into the text.

A major strength of the Paris Agreement is its near universal participation and acceptance of responsibility. This is much-welcome progress from the 1997 Kyoto Protocol, which only required mitigation action by a limited number of industrial country emitters responsible for bulk of historical emissions. It is also an important step forward from the 2009 Copenhagen Accord, which was put together at great haste by a small group, leaving most countries on the political sidelines.

The Bad: Unaccountable and Uncertain

The 1992 United Nations Framework Convention on Climate Change laid down a broad legal structure for global cooperation to which future agreements were intended to provide more specificity. Paris did nothing of the sort.

Instead, the Paris Agreement introduces a new, and mainly worrisome, model of voluntary “nationally determined contributions” by governments. Many of the results are expected to be delivered by the magic of markets and not-yet-commercially available revolutionary technology, with world leaders cheering the change along.

For different reasons, this new model of voluntary national measures fits the interests of many key players, including the United States, China, and India. But it leaves the future timetable for actual emission reductions squarely in the hands of the largest polluters with no collective system in place to enforce that individual countries meet clear targets.

The success of the system depends too much on the good will of world leaders. Many national politicians who invested political capital in making the Paris Agreement a reality—for example, U.S. President Barack Obama—will not be in office to oversee even initial implementation. The continued interest of those who will replace them cannot be easily assumed.

The result is a global system characterized by political uncertainty about the future scope of action and a lack of a clear price signal for carbon. This is a situation that markets will not respond well to and the planet may not be able to afford.

The Ugly: No Pledge, No Commitment

This so-called “bottom-up” approach may have been necessary to reach a deal in Paris. But it made it impossible to create an agreement where countries are clearly held answerable. The flamboyant language of aspiration coming out of Paris cannot hide the fact that the agreement is essentially void of clearly actionable commitments.

On both the two high-profile issues that matter the most—emission reductions and financial investments—there are no new explicit numerical targets for individual countries and no meaningful mechanism for ensuring accountability.

The Paris Agreement does not anywhere dare use the words “pledge” or “commitment.” So averse is the agreement to anything that may be seen as too binding that its announcement was delayed at the very last minute as the United States insisted on replacing the word “shall” with “should” in relation to the responsibility of industrialized countries to mitigate the effects of climate change (Article 4.4).

The result is a Paris agreement replete with the sound and fury of good intentions, but little else. It is heartwarming, for example, that Paris endorsed the new 1.5°C temperature target. But what is not in the agreement is any clue to how this might be achieved. What is in the agreement suggests that it will not.

40% Worldwide Are Unaware of Climate Change

Similarly, it is nice that Article 7 on adaptation to climate change (a perennial developing country concern) is amongst the longest. But there is nothing concrete in that section, especially not on financial support. The inclusion of the language “loss and damage” to deal with potentially irreversible costs of climate change in vulnerable developing countries (Article 8) is a step in the right direction. But the related conference Decision attached to the Paris Agreement makes it clear that the article “does not involve or provide a basis for any liability or compensation” (Paragraph 52).

The collective result is a Paris Agreement that makes it necessary to continue talking about the same set of issues we have now talked about for a quarter of a century. Meanwhile, the reality of climate change grows worse.