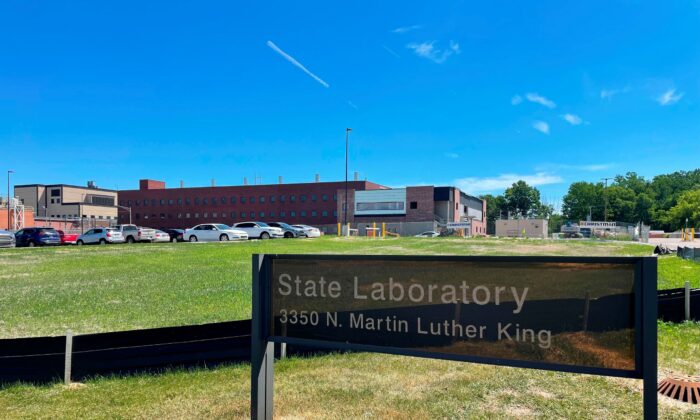 A lab where the state health department tests blood from newborns for more than 50 rare diseases in Lansing, Mich., on July 2022. (Joey Cappelletti/Report for America via AP)
US News

DETROIT—A judge has found key parts of Michigan’s newborn blood-testing program unconstitutional in a challenge by four parents who raised concerns about how leftover samples are used long after screening for rare diseases.

The lawsuit is not a class action. But the decision is likely to have an impact on how the state maintains millions of dried blood spots and makes them available for outside research.

Research with newborn blood spots occurs in other states, too.

“Michigan undoubtedly has some level of interest in detecting rare blood diseases in its infant population,” U.S. District Judge Thomas Ludington said. “But … defendants’ post-testing conduct is not necessary to effectuate that interest because ‘the health of the child is no longer at stake.’”

At the state’s direction, Michigan hospitals routinely prick the heels of newborns to draw blood to check for more than 50 diseases, a longstanding practice across the United States. Leftover blood spots are sent to the Michigan Neonatal Biobank in Detroit for safekeeping. Scientists can pay a fee to use them for various research projects.

Since 2010, Michigan must have permission from parents to use spots for outside research. But attorney Phil Ellison argued that the program still violates constitutional protections against searches and seizures, and might not be fully understood by parents who are given a form soon after the rigors of childbirth.

Ellison said the consent form and a related brochure are vague, making no reference, for example, to the state collecting fees from scientists for research.

“Indeed, the forms state explicitly that the DBS will be ‘used by the state lab.’ In other words, there is no evidence of plaintiff-parents’ informed consent to sell the DBS,” the judge said in a 32-page opinion on Sept. 13, using an acronym for dried blood spots.

Ludington ruled in favor of the four parents on more than a dozen issues, including long-term storage and use of blood spots by private parties. He set some points aside for a future trial.

The judge didn’t come up with a remedy. But he suggested the state could avoid future conflicts by simply creating a detailed form with a series of checkboxes for parents to consider.

“This case isn’t about stopping the newborn screening program,” Ellison told The Associated Press. “It’s to put the scope of participation in the hands of moms and dads as opposed to the government or a government bureaucrat. … Moms and dads have to be fully informed and make intelligent decisions. The current practice doesn’t meet that.”

Despite the judge’s ruling, the state health department said Friday that it’s confident the program complies with state and federal laws.

Earlier this year, at a separate stage of the case, the health department agreed to destroy more than 3 million blood spots stored in Lansing, but millions more remain under state control.

The department has defended the program. It emphasizes that no spots are stored for research unless parents give permission. Spots also can be destroyed upon request, though the number of people who have taken that step is small.

A code—not someone’s name—is attached to blood spots that are stored in Detroit, making threats to privacy during research “very low,” according to the state.

Research with blood spots occurs in other states, including California, New York, and Minnesota, where they can be kept for decades.

In 2009, Texas agreed to destroy millions of newborn blood spots that were stored without consent. Spots obtained since 2012 now are destroyed after two years unless Texas parents agree to have them maintained longer for research.