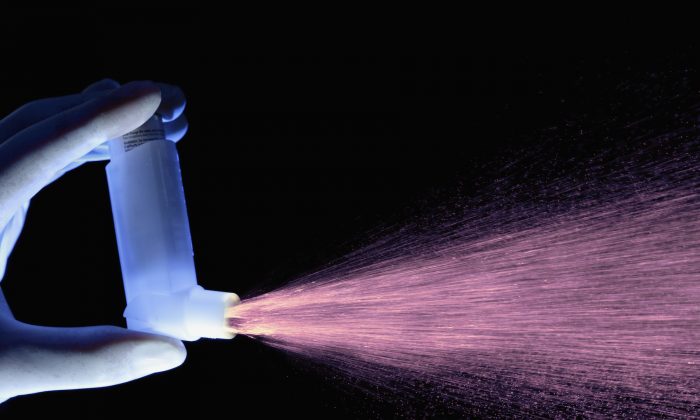 In this undated image an asthma inhaler is seen dispensing a dose of drug. (Getty Images)
Crime and Incidents

A family from Minnesota is suing the Lakeville school district and a school nurse after their teen daughter was left in a vegetative state after an asthma attack.

The parents of 14-year-old Aaliyah Bowen—an eighth-grader at McGuire Middle School—are seeking more than $10 million in damages. They claim the school and its nurse are responsible for failing to treat their daughter properly.

The lawsuit, which was filed in U.S. District Court on Sept. 5, claims Bowen was sent to a physical education class shortly after an asthma attack on April 16, without proper examination.

During the gym class, the teen lost consciousness and was rushed to a hospital, the family’s attorney said in the lawsuit. The 14-year-old will now require care-taking services for the remainder of her life, according to her parents Marquetta Silva and Kenyatta Bowen.

The 14-year-old went to the school nurse after having had an asthma attack with a severe exacerbation. She was given an albuterol nebulizer without testing her breathing, court documents claim.

Lakeville school district and the nurse were reportedly aware of Bowen’s extensive medical history of asthma with severe exacerbations and that she sometimes required medical intervention, reported Fox 32.

The teen lost consciousness while in gym class and was deprived of sufficient oxygen for about 30 minutes.

“Tragically, she sustained a catastrophic and permanent brain injury and remains in a persistent vegetative state,” the complaint reads.

Asthma is dominating the news agenda today after we released our analysis showing deaths from asthma are at their highest in a decade.
For everyone who has asthma and is asking what to do in an asthma attack, we have this handy infographic. Please do share to spread the word! pic.twitter.com/2ZUS0TuLRS

The school district told the Epoch Times in a statement:

“Lakeville Area Schools are deeply saddened by the medical incident regarding one of our students last April. We express our deepest sympathy for the student and family. The district takes student health seriously and abides by medical protocols and emergency response procedures. It is our position that the Lakeville Area Schools are not responsible for the injuries outlined in the complaint.”

Family Sues Hospital After Death of Mother and Baby

In a separate incident in California, a hospital and two of its doctors are being sued by the family of a Bakersfield mother who died along with her newborn son while under their care.

The lawsuit alleges the hospital and doctors were careless, negligent, and that the deaths of Dominguez and her son could have been prevented, reported Fox 26.

The pair filed the lawsuit for wrongful death, claiming Park treated the 23-year-old at the hospital on April 15 for high blood pressure and swelling. She was eight months pregnant at the time.

Dominguez’s mother said her daughter was prescribed labetalol by Park, which helps lower blood pressure. The doctor allegedly told Dominguez that her swelling symptoms were caused by a diet too high in sodium.

Dr. Yu then saw her on April 17 for a check-up at the same hospital, who sent her home and told her to carry on with the same medication for her blood pressure, which was reportedly high at 145/100.
She had a seizure while sleeping just two days later and passed away shortly afterward.

The 23-year-old was due to graduate from California State University, Bakersfield, with a bachelor’s degree in psychology in May.

Her son Malakhi was delivered before she died, but was declared brain-dead and passed away later that day.

A spokesperson for Dignity Health Mercy Hospital Southwest told the Epoch Times that Park has since been removed indefinitely from the hospital.

“Our deepest sympathy goes out to the family for their loss. Safety and patient care are our highest priorities, and we take matters involving the quality of care very seriously. Dr. Arthur M. Park has been removed indefinitely from the hospital’s OB call schedule,” the spokesperson said.

“Under state law, we are not able to discuss specifics of any matters of peer review involving physicians on staff at the hospital. Dr. Park does not have medical privileges at our sister facility, Bakersfield Memorial Hospital. Consistent with patient privacy laws and hospital policy, we do not discuss the specifics of any patient’s care or the subject of ongoing litigation.”