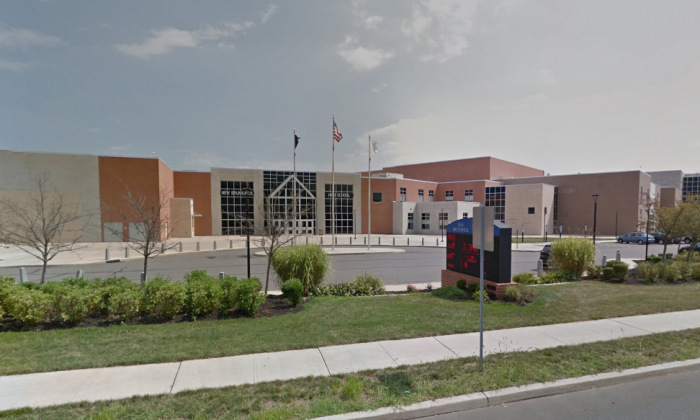 Parents rallied against the New Brunswick, New Jersey school system after a viral video shows the brutal beating of a student.

It all began when 15-year-old Oscar Aparicio, Jr. walked his way to lunch on March 10. A much bigger student attacked him from behind, putting him in a chokehold, then punched him repeatedly in the face.

The video shows the attacker savagely hitting the teen in the middle of the hallway, as he cursed at him and told him to not get up.

I was being told that he was hearing rumors about me talking bad, but I never was.
— Oscar Aparicio, Jr.

As Aparicio Jr. lay hurt on the ground, the attacker then kicked him in the head.

After the beating, the security guard is seen slowly approaching the assailant and taking him away.

The victim told ABC 7, that he barely knew his attacker, but that he did know he was on the wrestling team.

“I was being told that he was hearing rumors about me talking bad, but I never was,” Aparicio Jr. told ABC.

The family of the victim is outraged about how the school handed the situation, and said that the victim could have been hurt even worse since the attacker is on the wrestling team. They also said the attacker should be expelled.

“There was a female security guard, and in the video you can actually see her, she was witnessing the whole thing that was going on,” Aparicio Jr. said.

The victim sustained injuries including a fractured nose and sprained shoulder. He also lost a tooth, and three other teeth were damaged during the attack.

However, the victim’s father said the school never asked if the boy needed an ambulance.

Where was security? Where?
— Rosa Nieto, Victim's mother

According to Univision 41, when the victim’s mother, Rosa Nieto, saw the video she was shocked.

“I only saw how my baby defended himself and raised his hands and nobody went and helped him,” said the victim’s mother crying.

She added: “Where was security? Where?”

Police have charged 16-year-old Joshua Santiago with assault, but the school only gave him a 7 to 10 day suspension.

Infuriated with the light punishment by the school, a rally was held in front of the Board of Education’s headquarters to improve security at the high school.

Parents and students held up signs asking for justice and condemning the school system for its lack of action towards the situation.

“The security guy as you saw in the video is just standing there watching him get beaten up,” said the victim’s cousin, Giselle Rodriguez, to station NJ 101.5.

However, school officials say they followed protocol during the incident.

“Parents can feel confident that any act of violence will be met with appropriate consequences, while victims of crimes will be provided the support they need,” said superintendent Aubrey Johnson in a statement.

However, incidents of harassment, intimidation, and bullying have been on the rise. According to New Brunswick Today, Johnson said in January that there had been 11 episodes in December, more than twice the number reported during the same month the year before.