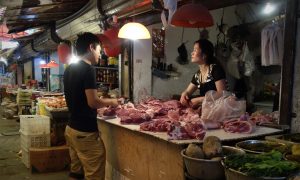 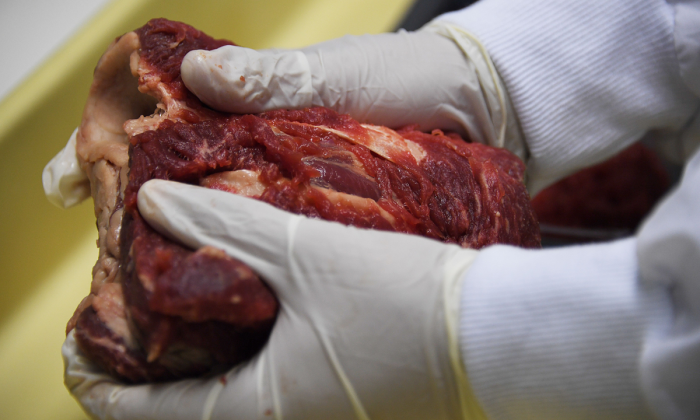 Parents Protest Over Moldy Food Served to Students at Local School in China, Suppressed by Police

Rotten and expired food served as lunches to students at the Chengdu Number 7 Experimental Middle School in Sichuan Province, China, has caused outrage, rioting, and suppression among parents involved since March 12.

Police used pepper spray at least once to subdue angry parents during a protest, and a public statement made by the school was allegedly attended by actors posing as parents.

The local authorities later claimed the food was examined and met all safety standards.

According to a report from Radio Free Asia, parents discovered the rotten meat on March 12. Children were having abnormal symptoms at that time. Several hundred parents gathered at the school gates and demanded an explanation.

The pictures included food that was moldy and expired.

The parents sued the government education bureau. Pictures of the food that was discovered were also shared on social media.

On March 13, after the revelation, local police in Sichuan said there would be an investigation of all school cafeterias, from kindergartens to universities.

The cafeteria in the school isn’t technically connected to the school. School meals are provided by a contracted company called Sichuan Deyu Logistics Service Management Ltd. According to its website, it provides food for 100,000 students.

The foods discovered included meat that had been kept for an uncertain amount of time. There was squid, pig stomach, jerky, and chicken thighs, as well as flavorings and additives.

Some of the food had already begun giving off a foul odor.

The fees for the Number 7 Middle School are $6,000 per year. Many government official’s children are reported to attend the school.

“Teachers and children eat together,” said Li, a mother of one of the students at the school, in an interview with the Chinese language Epoch Times. “They all eat this stuff, and the teachers would all be shocked.”

In 2017, the school’s cafeteria won an award as a model example for cafeterias, according to many mainland media reports.

On March 13, several thousand parents demonstrated in front of the Number 7 School. A mother by the name of Liu said that the front gate and the playground were packed with parents.

In an interview with The Epoch Times, Liu also said that some parents went to petition at the local government bureau; parents carried large banners and blocked roadways during their protest.

More than 1,000 police arrived to suppress the protest, using pepper spray on the parents. The banners were torn up by the police, and many parents were beaten and detained.

Li, who was at the scene since the issue began, said that on the evening of March 12, a truck came to clean out the food storerooms, and ship the food off-site. The parents also reported that to police.

“There were a lot of people, they were at the cafeteria, and they surrounded the trucks,” Li told The Epoch Times. “The police were surrounding and protecting the contractors.”

One parent said that those who petitioned were beaten by the police, and instead, the boss of the company was protected by the police.

The lawyer for Sichuan Deyu Logistics Service Management was protected by the police, and all information regarding the event was quickly censored from social media. All related information from the lawyer’s website was also deleted.

The appeal by the parents included seeking the release of parents who had been detained, removing the vice principal who was in charge of the cafeteria, and suspending the principal.

Other demands included investigating the person in charge, freezing the assets of the associated companies, punishing the contractors and suppliers, and installing closed circuit television to monitor the cafeteria.

The parents demanded that students be offered physicals and given health checks over an extended period of time, and that the schools with tainted food must cover the costs. The school would also have to repay affected students, at triple the amount that parents paid for meals.

Since the school is a public school, it’s connected to the Chinese Communist Party (CCP).

Parents were informed that the school would cover the cost of students checking into hospitals. However, the exams given were defined by the school. If parents took their children to a hospital on their own, then the hospital wouldn’t accept them.

Between March 13 and 16, a large number of students checked into six hospitals. There were 929 students who checked into the area hospitals, 852 received physical examinations, and 77 received treatment.

Police continued their crackdown on the protest, and began to gather information about the protesting parents, including names, phone numbers, and addresses. People were sent to the houses of parents on claims of understanding the lawsuit filed against the government education bureau, but were likely dispatched by the police.

The area around the school was cut off by the police. Thirty police cars surrounded the parents there, and all businesses in the vicinity were closed. After intense censorship of original comments on social media about the moldy food, all comments instead became critical of the parents.

Social-media messages also stated that children weren’t allowed to transfer to other schools. The local private schools in that area were said to reject students from the Number 7 school.

Several parents currently being investigated by the police are accused of “disorderly behavior.” The parents were accused of counterfeiting the claims about moldy and expired food. Another internet user who spread the information was detained.

The inspection of the food by the CCP claimed that only several pieces of food were found to have mold.

Some internet users said that the CCP is untrustworthy. “[The CCP] finds whoever brings up a problem and takes them out.”

“No one believes anything the government says,” another user said. “This is what a government with low credibility does.”

At the press conference, the CCP official said that there will be an investigation into the companies involved with the cafeteria.

The principal has been dismissed and will be replaced.