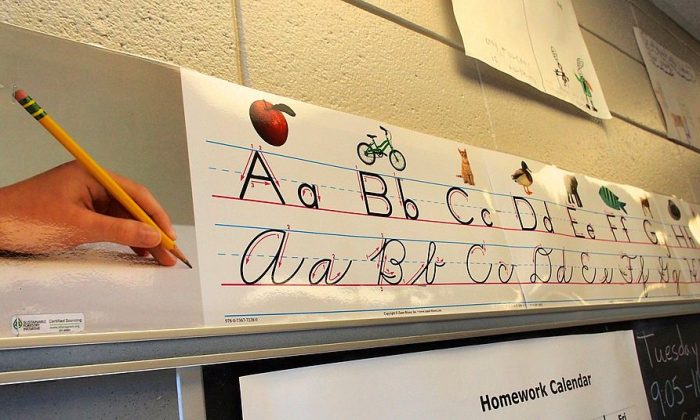 A poster showing third-grade pupils how to write in printed and cursive letters runs across the top of a blackboard at Triadelphia Ridge Elementary School in Ellicott City, Maryland on October 15, 2013. (Robert MacPherson/AFP/Getty Images)
US News

Maryland parents and politicians are pushing back against a new health curriculum that allows schools to shield from parents the fact that their children have an alternative gender identity or are transitioning to the opposite sex.

A federal court on August 18 dismissed a lawsuit from an anonymous group of parents who attempted to block the implementation of the new guidelines in Montgomery County.

The Montgomery County guidelines (pdf), which have been applied with similar language in Baltimore County and Prince George’s County, say students can have their birth name at home and assume a cross-gender name at school without parents being advised.

Brenda Diaz, a teacher in Montgomery County, resigned and decided to homeschool her youngest child because the scripted lesson plans on race and gender made her uncomfortable.

“If you have conservative values, if you believe in a traditional family composed of husband and wife and children, the lessons make you unbelievably uncomfortable,” Diaz told The Epoch Times.

“The scripts for race, gender and family life are geared toward discussions of people who are outside the norm of successful families,” Diaz added. “It is not the government’s place to dictate to students what a successful family looks like.”

Alex Fahmy, a critic of the new health curriculum who ran as a candidate for Montgomery County School Board, told The Epoch Times that the new content is dangerous for children.

“The new health curriculum encourages boys and girls to pick their own gender and to be scared to live in their body,” said Fahmy, of Damascus, Maryland, said. “They are being taught to hate themselves.”

The administrative procedures for Prince George’s County School staff include a similar protocol: “School staff shall not disclose information that may reveal a student’s transgender status to others, including parents and other school staff, unless legally required to do so, or the student has authorized such disclosure.”

“There is no privacy right of the transgender student in absence of the parent’s rights,” Cox told The Epoch Times. “You end up with the teacher in the school knowing more about the child’s struggle with identity than the parent.”

“In my view, this indoctrination of children by transgender groups is child abuse,” Cox added.

Cox, a Maryland delegate and a legal specialist in constitutional law, is the author of a Maryland Parental Rights Act bill that has been tabled by the legislature.

Cox told The Epoch Times that school boards don’t override the authority of parents regarding the safety of their children.

Parents who have attempted to get a preview of the lesson plans for this year’s updated health education curriculum have been stymied by the Public Information Office of Montgomery Public County Schools, according to Dee Reuben, spokesperson for a citizens’ group named United Against Racism in Education.

A parent who filed a Freedom of Information Act Request for this content was advised by the Montgomery Public Schools that recovery of the curriculum requested would take 30 days and would include a “recovery cost of between $250 and $5,000 and that “this fee will not be waived.”

The Moore campaign could not be reached for comment.

Approximately 2 percent of Maryland teens, or 4,860, identify as transgender based on a survey by The Williams Institute at University of California at Los Angeles.