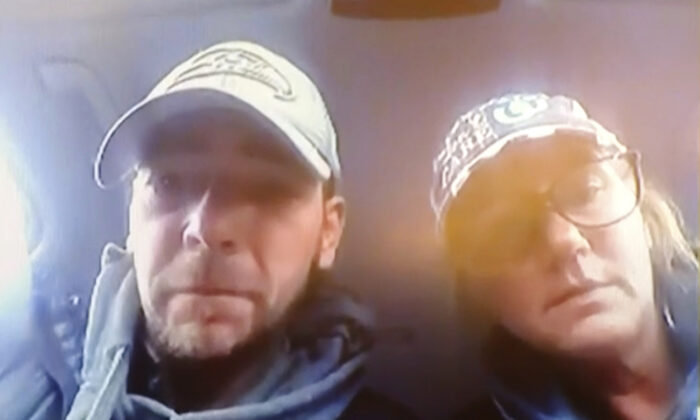 James (L) and Jennifer Crumbley are shown during the video arraignment of their son, Ethan Crumbley in Rochester Hills, Mich., on Dec. 1, 2021. (District Court via AP)
Crime and Incidents

Jennifer and James Crumbley, the parents of an alleged shooting suspect, have been taken into custody after police found the couple inside a building in Detroit.

Ethan Crumbley, their 15-year-old son, is suspected of having opened fire and killing four people at Oxford High School in Oxford, Michigan, on Nov. 30.

The teen was charged as an adult a day later, with one count of terrorism causing death, four counts of first-degree murder, seven counts of assault with intent to murder, and 12 counts of possession of a firearm in the commission of a felony.

Parents Jennifer and James were not available for their arraignment on Friday afternoon in Rochester Hills. By late Friday, the U.S. Marshals Service released wanted posters for the couple and offered a $10,000 reward for information leading to their arrests.

Undersheriff Mike McCabe of the Oakland County Sheriff’s Office told the Detroit Free Press the couple’s abandoned vehicle was spotted at about 11:30 p.m. on Friday at the back parking lot of a building.

The owner of the building “knew [the vehicle] didn’t belong there,” McCabe said. After checking the license plate, which matched information posted by law enforcement, the building owner called 911.

The Crumbleys were taken into custody around 1:45 a.m on Saturday.

State police and SWAT surrounded the area of the 1100 block of Bellevue in Detroit, near the abandoned vehicle, and later found the couple, reported Fox News.

Each face four counts of involuntary manslaughter, after authorities said that James is believed to have purchased the gun that his son allegedly used in the high school attack.