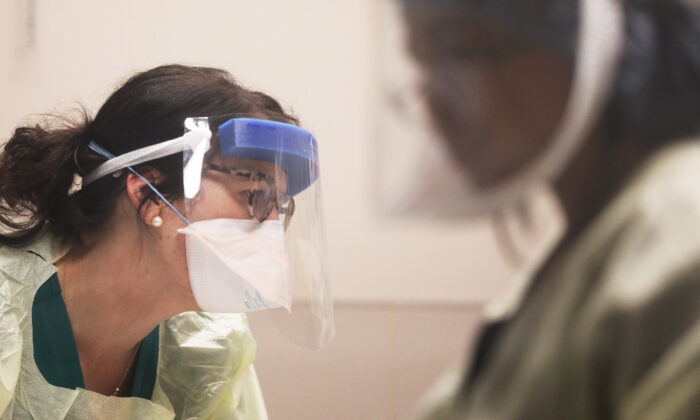 Health care workers care for a patient in Coronado, Calif., on May 7, 2020. (Mario Tama/Getty Images)
Arizona

Parents of teens who say they are transgender are keeping their eyes fixed on a court case that could lead to taxpayer-funded gender reassignment surgeries for minors.

One parent, who goes by the pseudonym Charlotte Jacobs to protect the identity of herself and her daughter, told The Epoch Times that she and other parents of teens suffering from gender dysphoria are paying close attention to the case.

“There are no studies that show that this surgery or any type of gender affirming surgery alleviates gender dysphoria … so it’s an elective surgery,” Jacobs said. “Why should taxpayers pay for this?”

Two plaintiffs, minor teenagers known as D.H. and John Doe, sued Arizona Medicaid because Medicaid does not pay for breast removal surgeries. The plaintiffs are seeking a court injunction to stop Arizona Medicaid from complying with its own rules against covering gender reassignment surgeries. Doe was 15 and D.H. was 17 when they filed the lawsuit.

“D.H. and John are unable to obtain the medical care that is a critical next step in their ongoing treatment for gender dysphoria,” states the lawsuit. “As long as the exclusion is enforced, they are barred from obtaining male chest reconstruction surgery.”

Jami Snyder, Director of The Arizona Health Care Cost Containment System is listed as the defendant in the case.

D.H. has since turned 18 and has dropped out of the case.

A lower court denied an injunction, ruling the plaintiffs had not shown they were likely to succeed on their claim that their exclusion from coverage violates the Medicaid Act.

John Doe has appealed the case, which is scheduled to go before the Ninth Circuit Court of Appeals on Nov. 19 in Phoenix.

“These two kids have a history of mental illness, including suicide attempts,” Jacobs claimed. “And, of course, they’re going to conflate and say that these suicide attempts are because they’re not getting their gender affirming surgery.”

There are also no studies that show undergoing surgeries will prevent these children from committing suicide, Jacobs said.

“In fact, the opposite is true,” she said. “There’s a 19 percent increase in suicide post surgeries.”

An amici curae (friends of the court) brief submitted for teens who had double mastectomies, but now regret the surgeries states they “believed that removing their healthy breasts would resolve their gender dysphoria and permit them to live healthy, well-adjusted lives,” but later learned that surgery “did not resolve the psychological issues underlying their gender dysphoria, but only increased their distress as they realized they had irreversibly altered their bodies based upon ideology.”

One of the teens is Keira Bell, a 24-year-old woman who changed her mind and “detransitioned” after gender reassignment surgery in Britain. She sued Britain’s National Health Service’s clinic for transgender youth—which in three appointments led her into a “devastating experiment” using puberty blockers at 16, and later a double mastectomy. The court later ruled that it’s unlikely that children under 16 can give informed consent for such puberty-blocking drugs.

Jacobs blames transgender activists, the media, Hollywood, the medical community and public schools for promoting the indoctrination of susceptible teens often suffering from depression into believing they should permanently alter their bodies through surgery to be happier. She disagrees with “gender affirming” therapy, which she believes only further indoctrinates already confused kids.

“All this transgenderism is part of the bigger social contagion that is happening, where all over Tik Tok and YouTube you can find before-and-after pictures of young girls with big smiles … of absolute euphoria after they remove their breasts,” she said.

Jacobs said the growing trend among gender dysphoric teens to have their breasts removed, and then post images of their surgical scars on social media is shocking and similar to anorexic girls posting images and videos of themselves getting thinner and thinner.

“YouTube actually was required to take all of those down,” Jacobs said. “But this is the same thing. It’s a social contagion of girls thinking that they’re going to be happy and that their mental illness will be eradicated if they would only cut off their breasts.”

If the court rules in favor of taxpayer-funded surgeries in Arizona, Jacobs expects the case could go all the way to the Supreme Court.