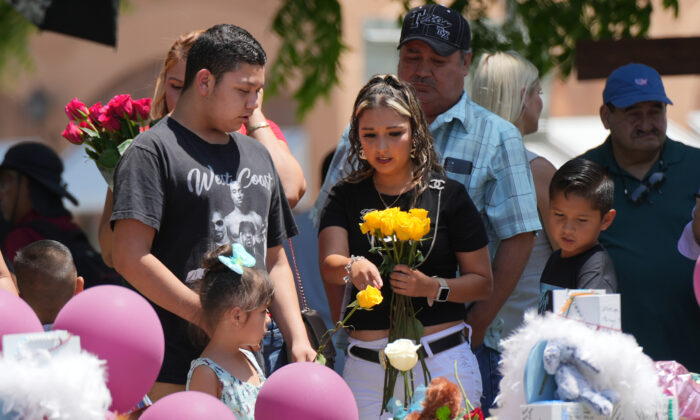 People visit a makeshift memorial for the 21 victims of an elementary school mass shooting in the town square in Uvalde, Texas, on May 29, 2022. (Charlotte Cuthbertson/The Epoch Times)
US News

Parents Need to Get Serious About School Safety, Parkland Dad Says After Uvalde

The families of 19 children and two teachers who were slain on May 24 in Uvalde, Texas, spent last week at funeral homes and gravesites, saying goodbye to their loved ones.

“The parents are destroyed. Heartbroken. They’re never going to be the same again—ever,” Andy Pollack told The Epoch Times. Pollack’s 18-year-old daughter Meadow was one of 17 people killed in the 2018 mass shooting at a high school in Parkland, Florida.

“The pain that they’re feeling now is a pain that never goes away. It doesn’t heal with time. It’s something that you just live with,” he said.

Within hours of the Uvalde tragedy, many Democrats in Washington, including President Joe Biden, began to focus on introducing gun control measures, while many Republicans balked at the idea and instead talked about mental health and hardening schools.

“I don’t even bother with the politicians,” Pollack said. “It’s the parents. If a parent, regardless of their party affiliation, thinks that it’s safe to send their children to a school without a single point of entry or police officers, then it’s on them. It’s their children they’re sending to the schools. It’s on the parents—send your kid to a safe school.”

Pollack said parents need to get involved in school safety—from electing school board members that focus on safety, to asking questions about the safety initiatives in place.

“Everybody thinks that it can’t happen to them. I’ve got to live with it. I sent my daughter to the school—like these parents—and I thought it was safe there,” he said.

As with the Parkland shooting, the police response to the massacre at Robb Elementary School in Uvalde, has been heavily criticized. Conflicting information added to the chaos in the first few days after the shooting, and Uvalde Mayor Don McLaughlin ultimately asked the Justice Department to step in and investigate the response.

Police officers were inside the school building within two minutes of Ramos gaining entry through an unlocked door, according to a timeline provided by the Texas Department of Public Safety. The department’s Texas Rangers are investigating the shooting.

Two of the officers were wounded by Ramos as he shot at them in the hallway before gaining entry to a classroom, where he then killed 19 children and two teachers.

As many as 19 officers waited in the hallway at one stage, Texas DPS Director Steve McCraw said on May 27.

“There were plenty of officers to do whatever needed to be done with one exception: The onsite commander inside believed they needed more equipment and more officers to do a tactical breach at that point,” he said.

The commander, McCraw said, “believed that, in fact, it was a barricaded subject, that we had time, there was [sic] no kids at risk.”

Meanwhile, several children in the classroom were calling 911, asking for police to come.

At Parkland’s Marjory Stoneman Douglas High School, 19-year-old Nikolas Cruz was stalking the hallways and classrooms, shooting for 5 1/2 minutes before walking off campus. The school’s only armed officer, Broward County Sheriff’s Deputy Scot Peterson, failed to enter the school and confront the shooter.

Additionally, the Broward County Sheriff’s Office and the FBI both came under scrutiny for ignoring multiple warnings about Cruz.

The FBI released a statement on Feb. 18, 2018, four days after the shooting in Parkland, saying the agency had received a tip about Cruz the previous month.

“The caller provided information about Cruz’s gun ownership, desire to kill people, erratic behavior, and disturbing social media posts, as well as the potential of him conducting a school shooting,” the FBI statement said. The information wasn’t passed along to the local FBI office, and no further investigation occurred, the FBI said.

“These kids that are threatening people’s lives, [law enforcement] all know who they are before they commit these heinous crimes, right?” Pollack said.

He suggests that current laws should be enforced before politicians look to create new ones.

“When someone’s sick, mentally sick, and they’re threatening to hurt themselves and others, why isn’t it going on their background? That’s what they should be looking at in Congress. Not making more laws—let’s enforce this law,” he said.

Under U.S. law, it’s illegal to sell a firearm or ammunition to an individual while knowing or having reasonable cause to believe that the person “has been adjudicated as a mental defective or has been committed to any mental institution.”

Pollack said the mass shooter in Buffalo, New York, last month should have been prevented from buying or possessing firearms because of his past behavior. The accused gunman, Payton Gendron, had threatened students at his high school a year ago and told a teacher he wanted to “murder and commit suicide,” according to New York Gov. Kathy Hochul.

At the time, school officials alerted police, and Gendron was taken to a hospital for psychiatric evaluation, but was released without any action taken under New York’s 2019 red flag laws, Hochul told WKSE radio on May 16.

Red flag laws allow a judge to issue an extreme risk protection order that requires an individual to surrender any firearms and makes it illegal for them to possess or buy a firearm.

In this case, after Gendron had been released from the hospital, state police didn’t seek to remove his firearms, and a mental health red flag didn’t appear on his background check when he subsequently bought guns. Gendron is accused of killing 10 people and wounding three others in a Tops Friendly Markets store in Buffalo on May 14.

“They’re taking away from real solutions when they focus on guns,” Pollack said, referring to lawmakers.

Biden, who visited Uvalde several days after the shooting, railed against Americans owning so-called assault rifles, referring to AR-style rifles, as well as the “gun lobby.”

“As a nation, we have to ask: When in God’s name are we going to stand up to the gun lobby? When in God’s name will we do what we all know in our gut needs to be done?” the president said on May 24, hours after the Uvalde shooting.

“What in God’s name do you need an assault weapon for except to kill someone? It’s time—for those who obstruct or delay or block the common sense gun laws, we need to let you know that we will not forget.”

Biden said he is expecting “rational Republicans” in the Senate to work on a bipartisan gun control bill.

White House press secretary Karine Jean-Pierre reiterated that the problem is “with guns” during a May 31 press briefing.

“I know there’s been conversation about hardening schools; that is not something that [Biden] believes in,” she said. “He believes that we should be able to give teachers the resources to be able to do the job that they’re meant to do at schools.”

Meanwhile, Pollack says the hardening (or securing) of schools to match courtrooms, airports, or sporting events is a no-brainer.

“[Biden] believes in hardening the Capitol building and protecting the people in Congress, but our children, they’re not a valuable asset? They’re not worth protecting?” he said.

Tempers flared during a House Judiciary Committee hearing on June 2 as lawmakers clashed over Second Amendment rights versus increased gun control. Members held a markup session on HR7910, legislation that was introduced just a week after Uvalde.

The bill raises the legal age of owning certain semi-automatic centerfire rifles or shotguns from 18 to 21, restricts magazine capacity to 10 rounds, and requires homemade firearms to be registered. It also adds criminal penalties related to gun storage in the home.

On June 1, he requested that legislative leaders convene a committee to review and provide recommendations “to prevent future school shootings” on the topics of school safety, mental health, social media, police training, and firearm safety.

“We as a State must reassess the twin issues of school safety and mass violence,” Abbott said in the request. “As leaders, we must come together at this time to provide solutions to protect all Texans.”

Funds were allocated to schools to increase their safety measures, including fencing around schools, security cameras, emergency communications systems, and secured buildings.

The laws were in response to a 2018 mass shooting at Santa Fe High School in Texas, during which 10 people were killed and 13 others wounded. The shooter, a 17-year-old student at the school who was armed with his father’s shotgun and a revolver, entered the art complex on campus and began shooting before surrendering to police 30 minutes later.

The school had an active-shooter plan in place and two armed police officers on campus. School leadership was also in the process of training and arming some teachers.

Four years later, in Uvalde, the shooter entered the school building through an unlocked door and was able to then enter an unlocked classroom. The school resource officer wasn’t on campus.

Pollack said the Federal Commission on School Safety that was formed after the Parkland shooting came up with dozens of recommendations for school safety.

“If the district in Uvalde would have read and taken President Trump seriously with his recommendations, there wouldn’t have been a shooting in Uvalde. It couldn’t have happened,” he said.

Since he lost his daughter, Pollack has advocated for parents to become more involved in school safety. He also recently partnered with a website that focuses on what schools, parents, and students can do to enhance safety.

“The first thing I like to tell parents is, ‘If you can afford it, send your children to private school,'” he said. “You don’t read about school shootings in private schools. … They take security seriously; you can’t get into those schools.”

While the tragedy in Uvalde has prompted debate about gun control, school safety, and mental illness, Warren Farrell said the absence of a father figure is being overlooked as a major contributing factor to the mental health crisis in young men.

“There have been six mass [school] shootings that have killed more than 10 people. … All six of them have been done by boys who have been dad-deprived—from Sandy Hook right on through to the Texas shooting,” Farrell, author of “The Boy Crisis: Why Our Boys Are Struggling and What We Can Do About It,” told EpochTV’s “American Thought Leaders” on June 2.

The absence of an involved father is “the single biggest predictor of suicide … [and] one of the biggest causes of mental illness in boys and drug addictions in boys.”