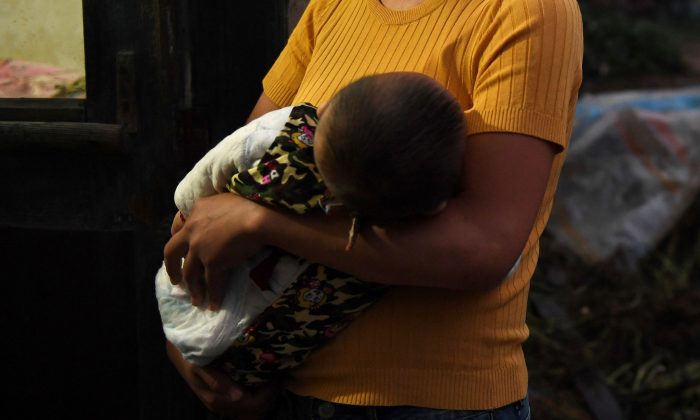 Most parents would generally agree that it’s better to make a baby stop crying rather than to make one cry. However, on Chinese social media, several parents have found entertainment in tricking their child into tears.

Parents recorded each other holding their baby, knocking on a surface behind it, then immediately comforting the child by stroking the back of its head. In the five shared examples, the child’s face would turn to a grimace and begin crying each time.

The parents seem to be attempting to trick their babies into thinking that they had hit the back of their head, but the actual reason for the crying is not clear.

The videos were recorded on TikTok, and later shared on Weibo, China’s version of Twitter on July 9. The video was shared by Sina Videos, the owner of Weibo.

The first video was recorded by user “79871374,” and shows a father holding a baby while standing next to a window. He knocks on the window three times with the back of his hand, then says: “Oh no, be careful! You bumped your head,” and rubs the back of the child’s head.

“Does it hurt?” he asks, as the baby quickly bursts into tears, crying loudly. The mother, who is recording the video, and the father burst into laughter.

The second video from user “cxq54321” shows a young father holding a child, and he knocks once loudly on a wooden board on the wall. He immediately rubs the baby’s head, and within just seconds, the baby is in tears.

User “jinger_530” posted a video of a man holding a smiling baby while standing next to a door. He knocks the door once, and the child’s face turns to a frown immediately, but does not make any sound. The parents both say, “Don’t cry, don’t cry.”

Another video is of a mother with her child, shared by user “fengdaqi.” She knocks once on a wooden wall panel, and then rubs the child’s head. “Oh no, oh no,” she keeps repeating over 12 seconds, until the baby finally begins crying. Another person can be heard laughing in the background.

The final video by user “93218301” shows a man holding a baby. He knocks on a wall, and follows the same steps as all the others above. He keeps saying comforting things to the child as it breaks into tears, but the man smiles all the while.