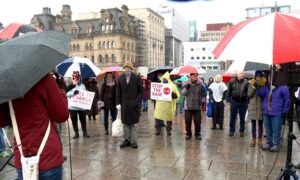 Bill C-6 defines conversion therapy in overly broad terms and would eliminate supports that would help young people who are questioning their gender identity to avoid the path of invasive medical intervention, says the founder of a group that advocates for the rights of children.

Pamela Buffone of the Canadian Gender Report says the language in Bill C-6 will have the effect of entrenching the currently dominant “affirming” model of care at a time when medical gender transitioning is still experimental and there is growing concern around it.

“What the bill actually does is it mandates ‘affirmation’ for gender-questioning children, and therefore it mandates transition,” Buffone said in an interview. “So ‘affirmation’ means you’re not allowed to question the reasons why a child or young person might identify differently from their birth sex.”

The bill passed third reading in Parliament on June 23 and is now headed to the Senate for debate.

If Bill C-6 becomes law, Buffone said, health-care professionals will be reluctant to have in-depth discussions with children about the risks of and alternatives to transitioning for fear they may be accused of practising conversion therapy.

“Our main concerns are that it’s going to restrict access to supportive therapy for gender-questioning youth and really limit the options, the health-care options, for kids who are in the situation of experiencing gender-related distress,” she explained.

“Parents are extremely concerned. They already find it difficult to find options for their children or adolescents who have suddenly adopted a different gender identity.”

Among Conservative MPs, over half voted against the bill on third reading, taking issue with the definition of “conversion therapy” in the proposed legislation. Conservative MP Garnett Genuis says the definition is so broad that it would criminalize private conversations between children and their parents.

Canadian Gender Report (CGR) is made up of parents and professionals who are concerned about children taking puberty blockers and cross-sex hormones and undergoing surgeries that irreversibly change their birth sex without first understanding the consequences of their decisions.

In a submission to the Standing Committee on Justice and Human Rights last October, the group said the legislation needs to be significantly redrafted, noting that it fails to recognize that sexual orientation and gender identity are two different issues.

CGR also says Bill C-6 would remove barriers to medical gender transition services and make it as easy as possible to transition genders without question and without assessment.

The government has said the legislation will make Canada’s laws on conversion therapy the most progressive and comprehensive in the world.

Some countries, however, are choosing to exercise more caution with respect to medical gender transitioning.

In a landmark decision on Dec. 1, 2020, Britain’s High Court of Justice ruled that children aren’t capable of giving informed consent to medical gender transition. All youth are therefore required to have a “best interests” court order before being considered as eligible candidates, including those aged 16 and 17, if there is “any doubt” as to whether their “long-term best interests” are being served.

In May, Sweden’s Karolinska Hospital made what’s been called “a major policy shift” and officially ended the practice of prescribing puberty blockers and cross-sex hormones to gender-dsyphoric patients under the age of 18 due to concerns over medical harm and uncertain benefits.

And in June 2020, Finland put in place new safeguards in which medical transition treatment for minors is only allowed after extensive psychological assessment is conducted.

Buffone stressed the importance of identifying the various mental health issues that children might be experiencing and helping them sort out those issues before “quickly sending these kids on a medical pathway of transition.”

“Kids often have a lot of underlying issues, whether they’re mental health issues, and so on, anxiety, depression, ADHD, autism, post-traumatic stress disorder—there’s all kinds of things that these kids could be dealing with,” she said.

Research conducted at the University of Toronto published in September 2019 suggests a link between autism and gender dysphoria. The study recommended that “children with gender dysphoria should be screened for a possible autism spectrum disorder (ASD) and, when warranted, receive a more comprehensive ASD diagnostic assessment to facilitate more holistic clinical care.”

Buffone believes schools should take a neutral position and provide a neutral space in order to truly help children who are questioning their gender.

“Should we be promoting and celebrating kids who are transitioning, or do we need to take more of a neutral approach?”