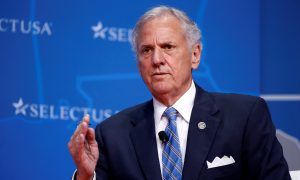 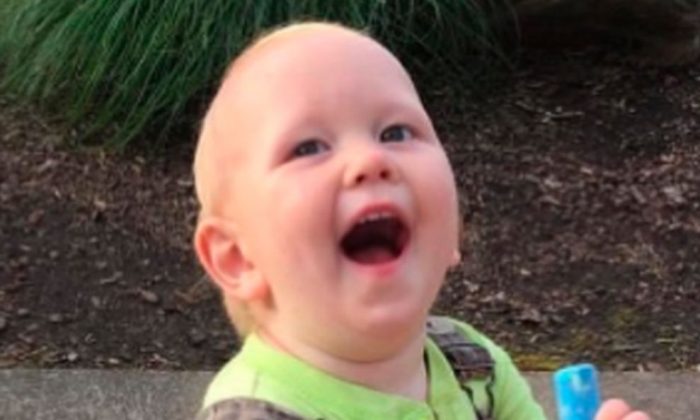 Warning: Photos might be distressing for some readers
By Jack Phillips

Joshua Marbury, the father of the boy, Jacob, said he and wife Alicia Quinney left the child in the care of a family friend for approximately two hours in March, KATU-TV reported. When they got back to their Sherwood home that night, they claimed the child was crying as the babysitter slept on their couch.

“The next morning, he woke up and that’s when I saw Jacob,” Quinney told the station. “The first thing I saw was a black eye.”

Their son was taken to a hospital, and his parents filed a police report.

The infant “was smacked across the right side of his face by our baby sitter (keep this person anonymous) to the point where MULTIPLE doctors (who in fact showed us hand prints) and the detective said it could have killed him,” Joshua wrote on Facebook.

He added that “we had a confession from the abuser saying they did it.”

The family include two photos of the boy’s alleged injuries to his face and upper body area. It has been shared more than 100,000 times.

Joshua said they believed they had a solid case, but no criminal charges have been filed.

That’s when the parents took to Facebook to express his anger and outrage.

“Something needs to be done,” Marbury wrote. “NOBODY can just hit a child and more to just get away with it because the child (can’t) verbally tell you.”

He referenced a 2012 Oregon Court of Appeals ruling that prosecutors say made it more difficult to file charges in abuse cases of victims who cannot speak.

“The first thing I saw was a black eye,” Quinney told the Oregonian newspaper. “I thought maybe marker got on his face or something. When he turned over, his whole right side of his face—black and blue.”

They learned their case would not be prosecuted last week, per the Oregonian:

Washington County Deputy District Attorney Dustin Staten emailed Quinney a link to a story published by The Oregonian/OregonLive detailing the challenges the law poses for prosecutors. The headline: “Even pets are better protected than young kids under Oregon abuse laws, prosecutors say.”

To convict a suspected child abuser of felony assault or criminal mistreatment, the article explained, prosecutors must prove that the victim suffered a “physical injury” under Oregon law. That means proving the child experienced “substantial pain.”

But appellate rulings have made that hard to prove if victims can’t talk about the extent of their suffering. Prosecutors say children younger than 5 often aren’t able to articulate “substantial pain.” The same can be true for older children with developmental disabilities or those who don’t want to speak out against their abusers.

A Change.org petition was created to get the Oregon Supreme Court overturn the lower court’s ruling.

“The abuser is able to walk away with no charges solely because the victim … cannot verbally (attest) to his abuse,” the petition says.

For children who cannot speak and may have been abused, there are signs, according to BabyCenter.com:

– Display behavioral problems or changes such as shunning a parent’s affections – or becoming excessively clingy.

– Abused children often show extremes in behavior: A normally outgoing and assertive child may become unusually passive, while a generally mild child may act in an aggressive manner.

– Become less talkative or stop communicating almost completely, or display signs of a speech disorder, such as stuttering.

– Act inappropriately adult or infantile. For example, a child may either become overly protective and “parental” toward other children or revert to behaviors like rocking and head banging.